We have decades of experience caring for patients with Hand and Wrist injuries as part of our Hand and Wrist Program, pioneering minimally invasive treatments and leading research for new treatments to improve patient outcomes.

LEARN MORE ABOUT THE Hand and Wrist Program
Melanoma: Introduction

Cancer is when cells in the body change and grow out of control. To help you understand what happens when you have cancer, let’s look at how your body works normally. Your body is made up of tiny building blocks called cells. Normal cells grow when your body needs them, and die when your body does not need them any longer.

Cancer is made up of abnormal cells that grow even though your body doesn’t need them. In most cancers, the abnormal cells grow to form a lump or mass called a tumor. If cancer cells are in the body long enough, they can grow into (invade) nearby areas. They can even spread to other parts of the body (metastasis).

There are 3 main types of skin cancer.

Basal cell carcinoma and squamous cell carcinoma come from the skin's structural cells (keratinocytes). These skin cancers are more common. But they are less dangerous.

Melanoma comes from the skin's pigment cells (melanocytes). Melanoma is much less common. But it is more likely to spread to other parts of the body.

The skin is the largest organ of the body. Skin protects us from heat, sunlight, injury, and infection. It also stores water and fat, and makes vitamin D. The skin has 3 layers:

The dermis has blood vessels, lymphatic vessels, hair follicles, and glands. Some of these glands make sweat. This helps keep the body cool. Other glands make sebum. Sebum helps keep the skin from getting dry. Sweat and sebum reach the skin's surface through tiny openings called pores.

The subcutis and the lowest part of the dermis form a network of collagen and fat cells. This layer stores heat and helps protect the body's organs from injury.

What are the different types of melanoma?

Melanoma starts when normal melanocytes become cancer. When cancer cells are on the skin, the cancer is called cutaneous melanoma. Most of what we know about melanoma (its behavior, staging, and treatment) refers to cutaneous melanoma.

Cutaneous melanomas come in these types:

Keeping an eye on moles

Sometimes groups of melanocytes make moles, also called nevi. Most people have some moles on their bodies. These moles are often pink, tan, or brown. They can be flat or raised, and are often round or oval. Most moles are on the chest or the upper part of the body.

Moles don't often grow or change very much. Moles can fade in older adults. Most moles are not cancer (benign). And they don't lead to cancer. Some abnormal moles, called dysplastic nevi, have an increased risk of melanoma. These should be checked regularly by a doctor.

If melanoma grows at the site of the original tumor, it tends to grow in one of two ways: 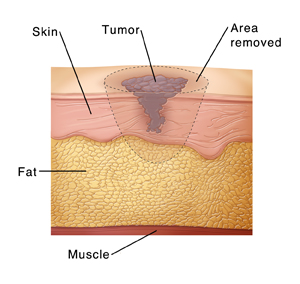 If left untreated, melanoma tends to spread to other parts of the body more quickly than most other types of skin cancer. This can make it more dangerous. This spread can be a bit unpredictable. Melanoma tends to spread first to lymph nodes in the area of your original tumor. For example, if the tumor was on your leg, it may spread to lymph nodes in your groin area. But sometimes melanoma may spread to distant areas of your body, even if your lymph nodes have not been involved. These distant areas can include the liver, lungs, or brain.

Talk with your healthcare provider