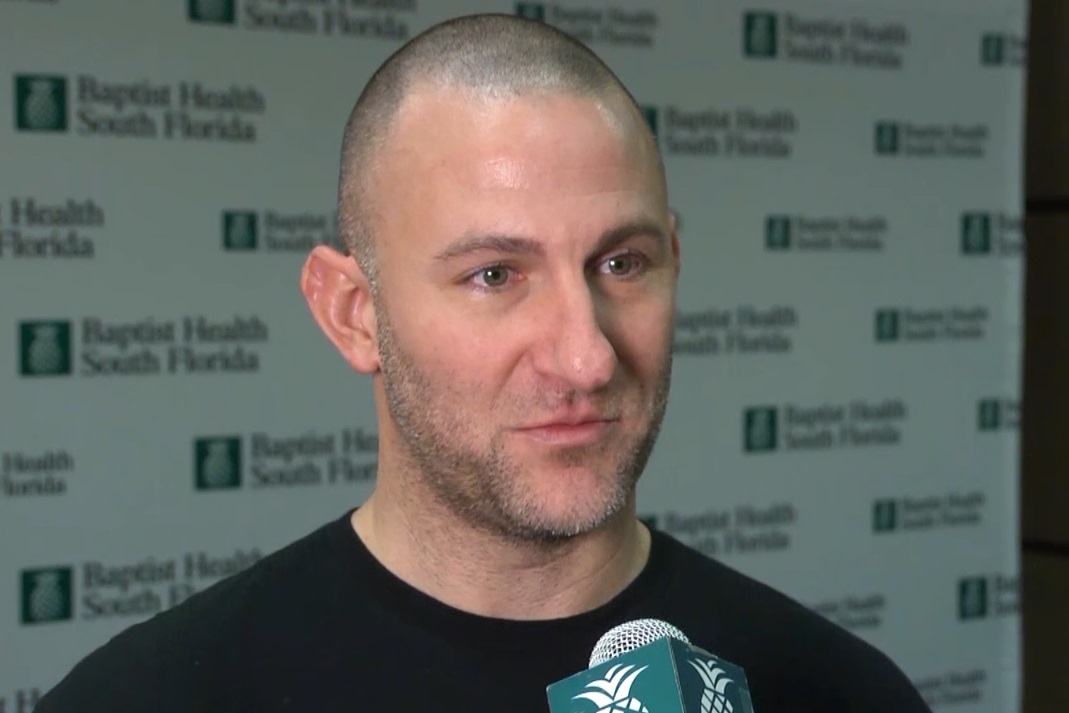 For nearly 10 years, Anthony Ameen has been on a journey of healing. But it wasn’t until a not-for-profit foundation that serves military and first responders connected with a team of leading medical specialists in Miami to give the wounded war veteran leg-saving surgery at Baptist Health South Florida.

When Anthony Ameen was serving as a U.S. Navy Hospital Corpsman, he ran to save the life of a wounded fellow Marine in a 2008 counterattack in Afghanistan, stepped on an improvised explosive device (IED) and was severely injured.

The Purple Heart decorated Marine lost his left leg below-the-knee from the explosion. His right leg was also shattered and severely burned.

Despite his remaining leg being operated on 32 times before coming to Miami, a gaping hole and chronic infection remained.

That’s when Carol Novak, founding board member of Restoring Heroes, stepped in. She had a team of doctors in Miami who had the expertise to fix Mr. Ameen’s leg for the final time. Jill Waibel, M.D., chief of dermatology at Baptist Hospital of Miami and Restoring Heroes champion, coordinated Mr. Ameen’s plan of care. Dr. Waibel is committed to serving military and first responders who have suffered traumatic scars, burns or amputations.

“I’m proud to help someone who’s made a huge sacrifice for our country,” Dr. Waibel said.

Charles Jordan, M.D.,  an orthopedic trauma surgeon at Miami Orthopedics & Sports Medicine Institute, led Mr. Ameen’s medical team which also included specialists in reconstructive surgery, infectious disease, micro surgery and dermatology. The infection in Mr. Ameen’s leg was at risk of spreading to other parts of his body and was making surrounding tissue susceptible of developing into cancer, according to Dr. Jordan.

The medical team implanted an antibiotic rod in Mr. Ameen’s tibia to provide a constant supply of medication to help heal the infection. Meanwhile, a section of skin was removed from Mr. Ameen’s thigh to form a flap to cover the open healing wound. Mr. Ameen had a subsequent surgery to remove the antibiotic rod. Dr. Waibel will continue to work with him to reduce the scarring on his right leg.

“Baptist Health and Restoring Heroes have been nothing but accommodating,” said Mr. Ameen. “If it wasn’t for this surgery I may have lost my leg.”

Mr. Ameen lives in Phoenix with his wife Stephanie and their four children. His experience led him to want to help other wounded veterans. He started his own charity organization, called Wings for Warriors, to support wounded military service members who have returned home after serving in Iraq and Afghanistan.

The Baptist Health News Team was there to capture Mr. Ameen talk about his experience with the doctors who cared for him in Miami. Watch the video now.