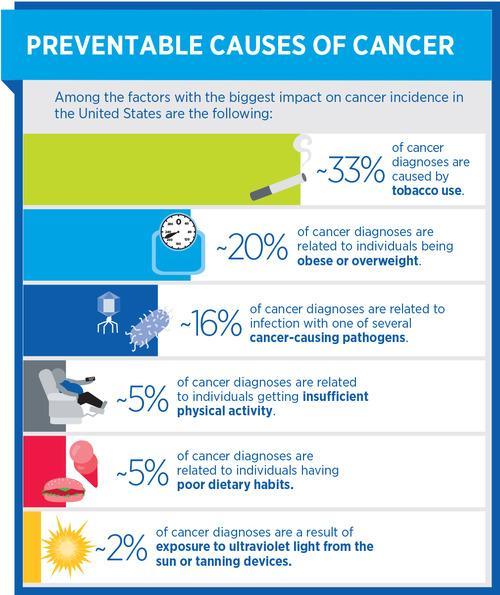 Most cancer deaths — more than 50 percent — in the U.S. can be avoided. That’s the word from the latest Cancer Progress  Report published on Sept. 16 by the American Association for Cancer Research (AACR).

Overall the news is mixed. On the positive side, there’s been a significant decline in the number cancer deaths, relative to 1990, and more people are surviving cancer — a survivorship population that now includes nearly 14 million in people in the U.S.

“Remarkable advances are contributing to the rise in the number of people who are surviving longer and living life to the fullest after their cancer diagnosis,” the AACR Progress report states.

But lifestyle choices and avoidable factors contribute to more than 50 percent of cancer deaths, according to the AACR status report. The report was widely covered by Time, Yahoo and other news outlets.

“Most notable among these causes are tobacco use, obesity, poor diet, lack of physical activity,exposure to ultraviolet radiation either through the use of  tanning devices or direct sun exposure, and failure to use or comply with interventions that treat or prevent infectious causes of cancer,” the AACR report stated. [See related chart, courtesy of the AACR].

Here are a few articles that have been published on this blog about reducing the risk of developing different types of cancer:

Despite the much-heralded health benefits of exercise and proper nutrition, most Americans don’t seem to be getting the message as average waistlines have expanded significantly from 1999 to 2012, researchers from the U.S. Centers for Disease Control and Prevention reported this week.

Those figures represent averages, says a report on the findings in USA Today. There is an even more troublesome aspect of the study under the category of “abdominal obesity” — which previous studies have shown increases the risks of diabetes, heart disease and premature death.

The increase in waistlines is occurring even as overall adult obesity rates seem to be leveling off.

In this blog, we’ve extensively reported on the benefits of exercise and proper nutrition. Here are some helpful articles:

Do you know what’s in your toothpaste? Some brands feature microbeads, which are polyethylene plastic beads, designed to add sparkle and appeal to the formula.

“But the beads do not disintegrate and are not biodegradable, and dentists are concerned that they’re getting stuck in the tiny crevices between the teeth and gums,” the Washington Post reports.

During routine teeth cleanings and examinations, dental experts have discovered the small beads and are voicing concerns that the particles could attract bacteria and trigger gum disease or other dental problems.  At least one major tooth paste manufacturer has removed the plastic beads from its formula, according to news reports.