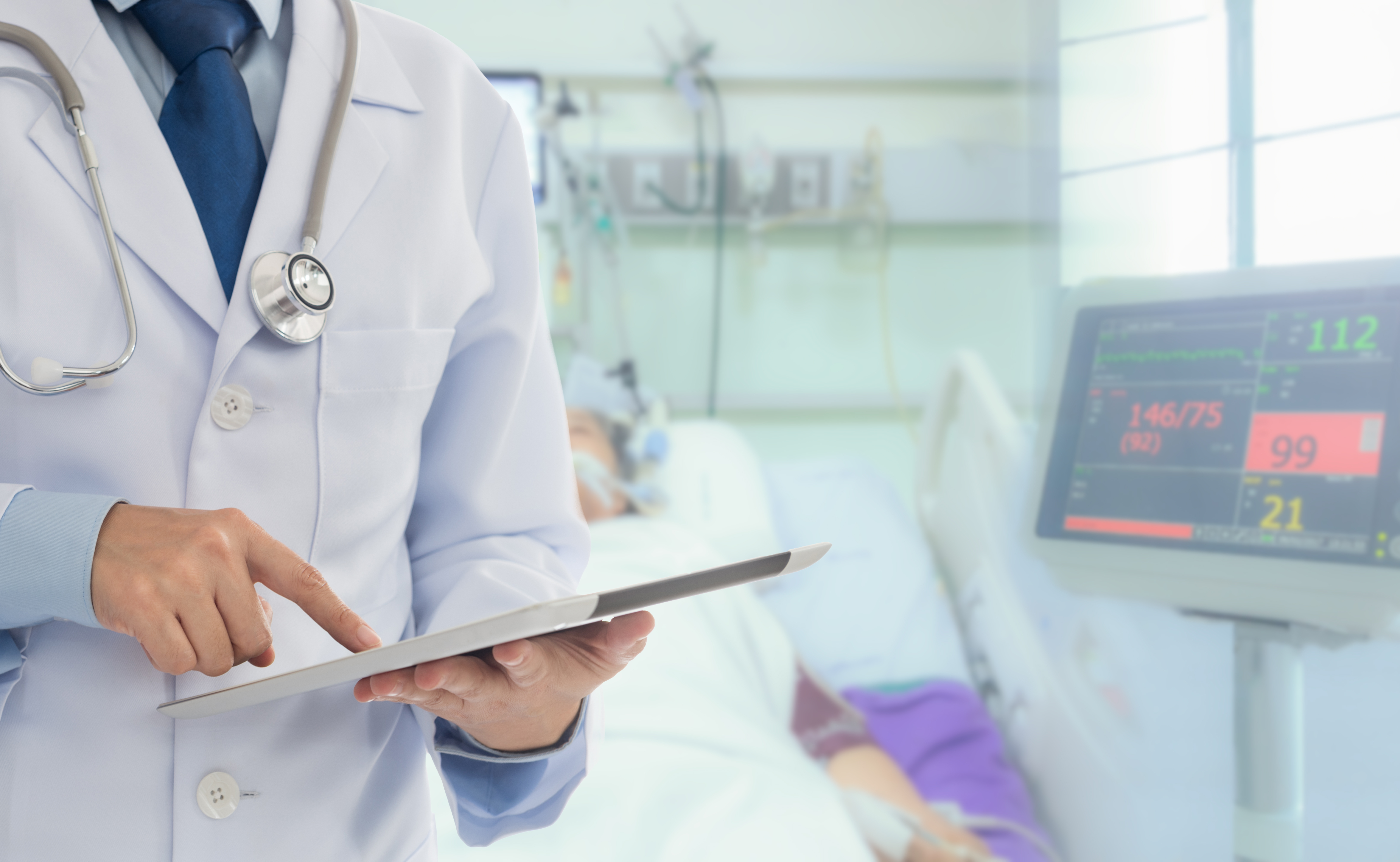 Last December, he spent 12 days deeply sedated on intravenous medication while on respiratory support as doctors worked to restore a normal heartbeat.  Mr. Machin was morbidly obese with an “ejection fraction” (EF) at 15 percent and he was in “cardiogenic shock,” the condition in which the heart can’t pump enough blood to meet the body’s needs. EF refers to how much blood the heart’s left ventricle pumps out with each contraction. A normal EF is 50 to 70 percent.

“You could tell by the look on the faces of the doctors and nurses that it was very serious,” recalls Machin’s wife, Lissette. “With a heartbeat of 170, he was getting more agitated. They had no choice but to induce coma.”

Best Christmas Gift
Mr. Machin, a pharmacist and father of two girls, ages 3 and 6, remembers waking up from his ordeal on Dec. 24 in a bustling ICU. He now calls it the best Christmas gift.

“Everyday, I had doctors come into the room. I mostly didn’t know who they were, but the care in the ICU was excellent,” says Mr. Machin. “I’m very happy that I was there. Everybody provided the best attention.” 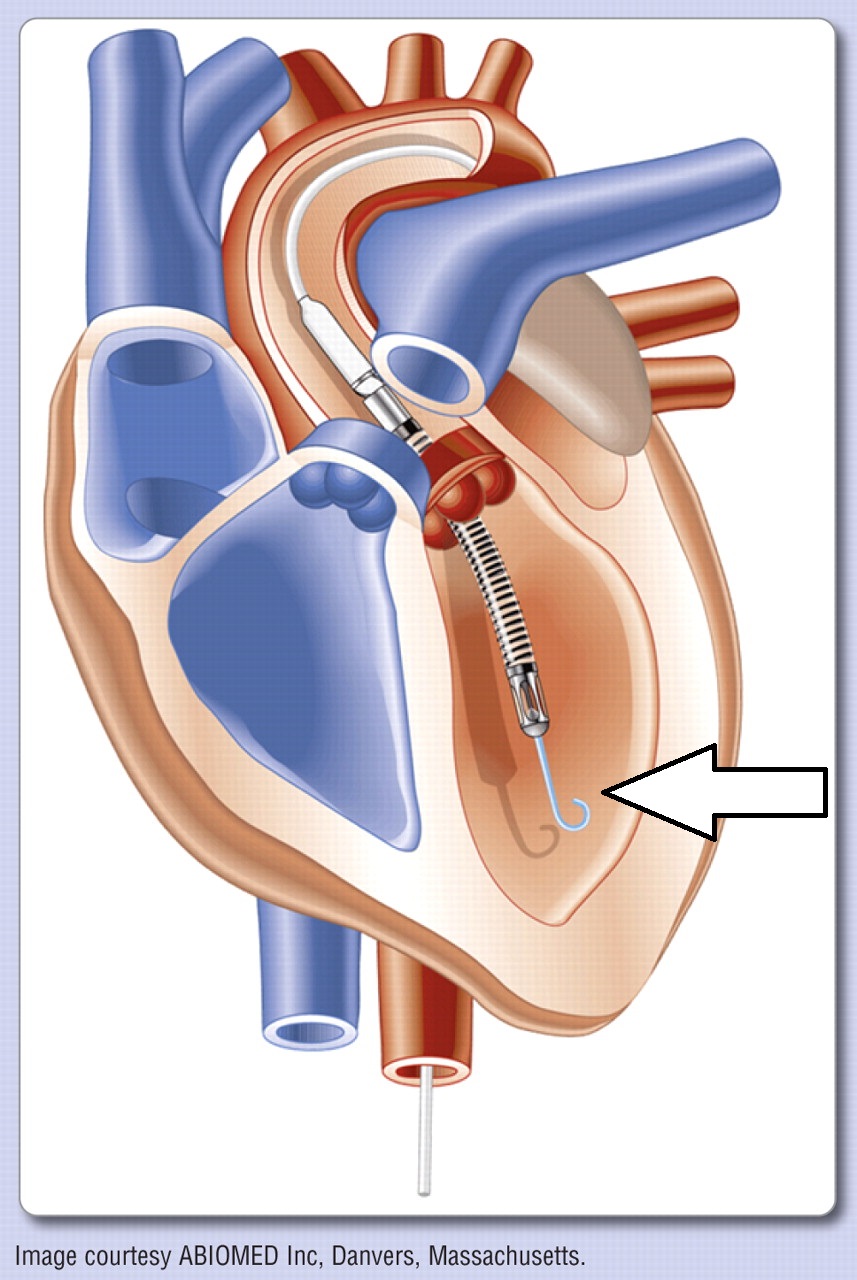 “His heart was in very poor shape, but because of his morbid obesity and other conditions including kidney failure, he was not a candidate for a heart transplant,” says Dr. Lloret, whose team opted to restore proper blood flow in Machin’s heart with the help of an Impella, the world’s smallest heart pump (illustration at left).

World’s Smallest Heart Pump
The Impella is a device that temporarily helps patients move blood through the heart and into the rest of the organs in the body. It provides patients with heart failure, such as Mr. Machin, another option when open heart surgery or transplantation isn’t possible.  It can also assist the heart while doing a high risk revascularization procedure of the heart,  such as placement of a coronary stent.

Dr. Lloret and Libby Watch, M.D., a vascular surgeon at the Institute, took part in the procedure to implant the Impella device into Machin. The tiny pump can be inserted via a catheterization procedure through the femoral, subclavian or axiliary artery, into the ascending aorta, across the valve and into the heart’s left ventricle. The Impella CP can provide 4 liters per minute of blood flow, suctioning blood out of the left ventricular and into the aorta.

“With the device, we were able to maintain cardiac output,” explains Dr. Lloret. “We were then able to lower the amount of pressor medications that he needed to maintain his blood pressure. That enabled us to treat the arrhythmia (rapid or irregular heartbeat).”

The tiny pump enabled Mario Pascual, M.D., an electrophysiologist with Miami Cardiac & Vascular Institute, and his team to perform an ablation on Machin.

A catheter ablation, such as the one performed on Mr. Machin, uses radiofrequency energy (similar to microwave heat) to eliminate abnormal electrical signals within the heart.  Ablating this tissue helps restore a heart’s regular rhythm.  His heart rate then maintained in a normal sinus rhythm.

‘I Feel Good’
Following extensive rehabilitation, Mr. Machin has been able to restore his EF back to a normal 50 percent. He has lost weight and has been able to recuperate his kidney function, which was also affected by his heart failure.

“I feel good,” says Mr. Machin. “I’m able to do the majority of things, taking it day-by-day. Every day, I’m getting better and my endurance is improving.”

Dr. Lloret says it was a collaborative effort from the Institute’s specialists as well as the intensivists and nephrologists that enabled Mr. Machin to recover. “It’s really a feel-good story,” he says.

“It was amazing,” recalls Machin’s wife, Lissette, a first-grade teacher. “We celebrated Christmas when he came home in February. We’re now able to go on mini vacations. He can walk and goes to the beach. And the girls have their dad back. “