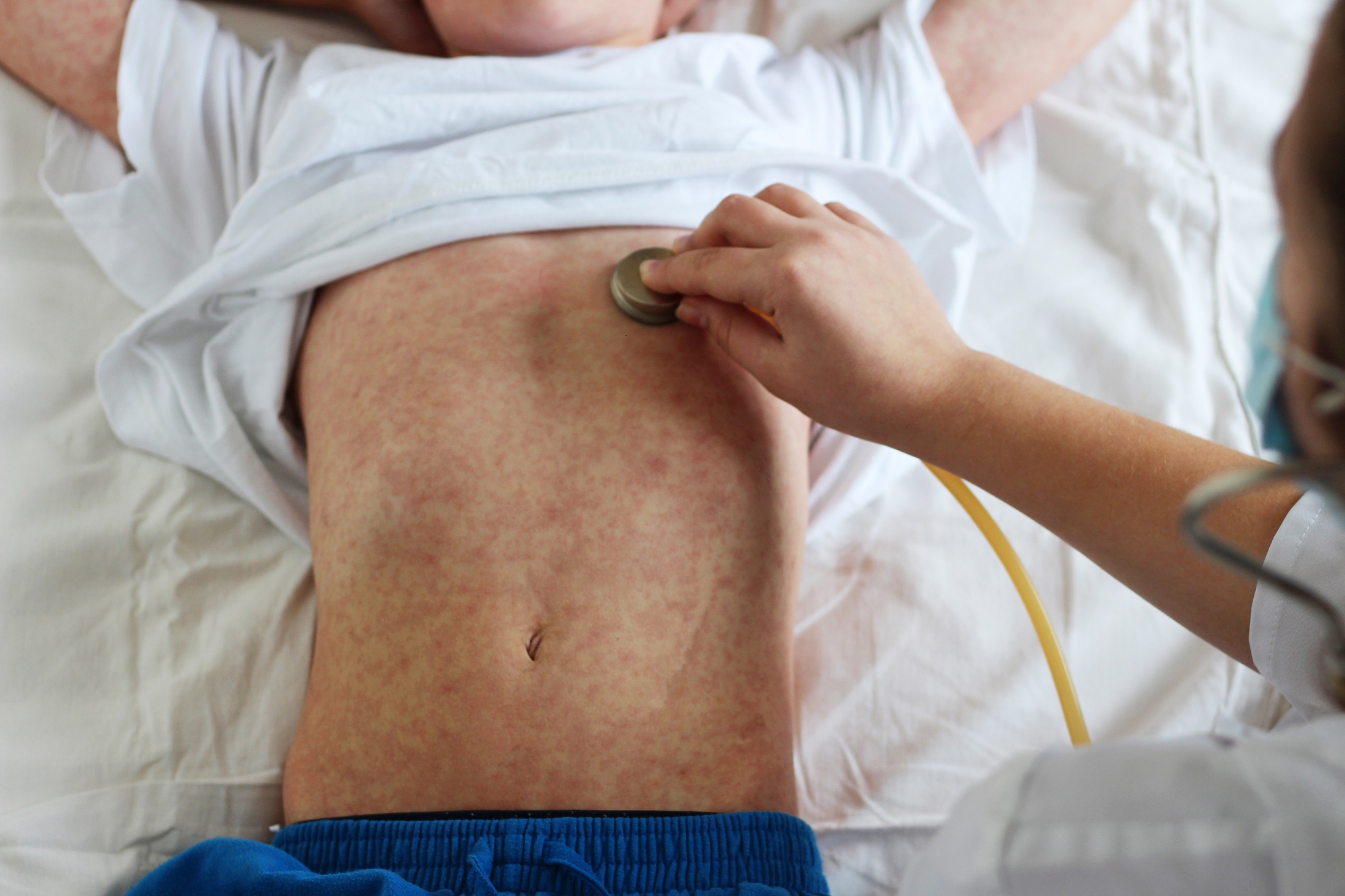 The Measles Threat: Here's Why Getting Kids Vaccinated is Vital (Video)

Here’s what pediatricians, emergency physicians and public health officials want parents to know about measles. It is one of the most contagious viruses in the world. Beyond flu-like symptoms and a rash that begins in the head area and moves downward, measles can develop serious or deadly complications, such as pneumonia and encephalitis (swelling of the brain).

And, most significantly, vaccination offers the best prevention against the disease, according to the U.S. Centers for Disease Control and Prevention (CDC), physicians and infectious disease experts.

And while other states are grappling with pockets of measles outbreaks, Florida is vulnerable because of its role as a hub for international travelers from countries with lower vaccination rates.

Part of the recommended MMR shot, which combines immunity protection against measles, mumps and rubella, the vaccine does not cause autism or other serious side effects, as some parents have heard over the years. The current anti-vaccination movement that is fueling concern in the medical community started about 20 years ago after an article in a respected medical journal raised the autism issue as part of a small-scale study. But that article was later discredited and retracted. And the medical license of the article’s writer was revoked by British authorities.

While measles has remained a common disease in parts of the world, U.S. public health officials had considered the virus eradicated in 2000. But since then, outbreaks have surfaced in some states, culminating in a current multi-state outbreak that is alarming pediatricians and emergency physicians nationwide.

The Best Prevention
“Vaccination is the best prevention,” said Fernando Mendoza, M.D., medical director of the Children’s Emergency Center at Baptist Children’s Hospital and associate medical director of Pediatric Emergency Services at West Kendall Baptist Hospital.  “Absolutely, 100 percent, that’s the best way to prevent it. Vaccinated kids don’t get the measles. There are reams and reams of data that show these vaccines are appropriate and effective.”

Dr. Mendoza and Agueda Hernandez, M.D., a primary care physician and medical director of the Baptist Health Primary Care Family Medicine Center at West Kendall Baptist Hospital, spoke recently at a Baptist Health South Florida news conference to clear up common misinformation about the measles vaccine and make sure that parents follow up with their pediatricians or primary care physicians to get their children protected if they haven’t been vaccinated.

“Most viruses in most kids will run their course and they will get better on their own,” explains Dr. Mendoza. “But it’s when you get complications … that’s when about one in 20 kids with measles will develop pneumonia, and one to three kids in 1,000 cases will die from measles.”

And while encephalitis as a complication from measles is rare, he adds, “that’s something you definitely don’t want your child to get. Inflammation of the brain can have long-lasting effects on functioning and on I.Q.”

“It’s important to have your children vaccinated on time according to the recommended schedule,” says Dr. Hernandez. “It keeps them and the community safe.”

Vaccines are Safer Than Ever
Eileen Marty, M.D., professor, Infectious Diseases, at Florida International University’s Herbert Wertheim College of Medicine, adds that vaccines against the measles and other dangerous diseases have become even more effective over the past several years. “Not only are vaccines safe, but they’re safer now than they’ve ever been,” says Dr. Marty. “We have new technologies for making vaccines that are excellent. They do the job and create the neutralizing antibodies in your child.”

Dr. Hernandez explains that measles starts out looking like a cold. “Your child will have a cough, fever, runny nose, red eye or pink eye (conjunctivitis) and sore throat,” she says. “The fever will likely intensify and then a rash will develop, starting at the head and moving down. It may not sound so bad at first, but then it can get complicated, especially with pneumonia, which is the leading cause of death in children who die from measles.”

Emergency physicians in South Florida have not seen many measles cases. Currently, Florida is not one of the states with outbreaks. State health officials in Washington, New York, California, Oregon, Pennsylvania, Connecticut, Colorado, and Georgia have reported measles cases exceeding the number of cases they usually see in a year.

Extremely Contagious
“With measles, there’s a very distinct, characteristic rash that happens inside of the cheeks in the mouth,” says Dr. Mendoza. “If we’ve identified that, we’ll put the child in an isolation room so that the contagion is reduced as much as possible. There is no cure for measles once you get it. It’s all supportive care. And I want to reiterate that even in the best and most highly trained hands and best hospitals, about one to three kids per 1,000 measles cases will die in supportive care.”

The contagious nature of measles makes vaccinations even more vital, physicians and public health officials say. Measles spreads much the same way other viruses do, through sneezing, coughing or touching. In addition to vaccinations, hand-washing is considered the best protection from contracting any virus.

“For every one person that gets the measles, 18 to 20 will become infected if they’re not vaccinated” says Dr. Mendoza. “To compare, one person with the flu will infect four other people who are not vaccinated. In one pre-school class, if one child walks in there with measles and no one is vaccinated, you can expect all of those kids to get the disease.”

While the state of Florida has strict policies about getting gets vaccinated, South Florida is vulnerable to an outbreak because it is a travel hub for international visitors, explains Dr. Marty.

“Because other countries have bigger outbreaks, when people travel from those areas, it poses a threat if our population is not properly protected,” she said. “Florida has had very strict laws, more strict than other states for years. But we are vulnerable because we’re a popular vacation spot and so we do carry the risk of importing all kinds of diseases.”