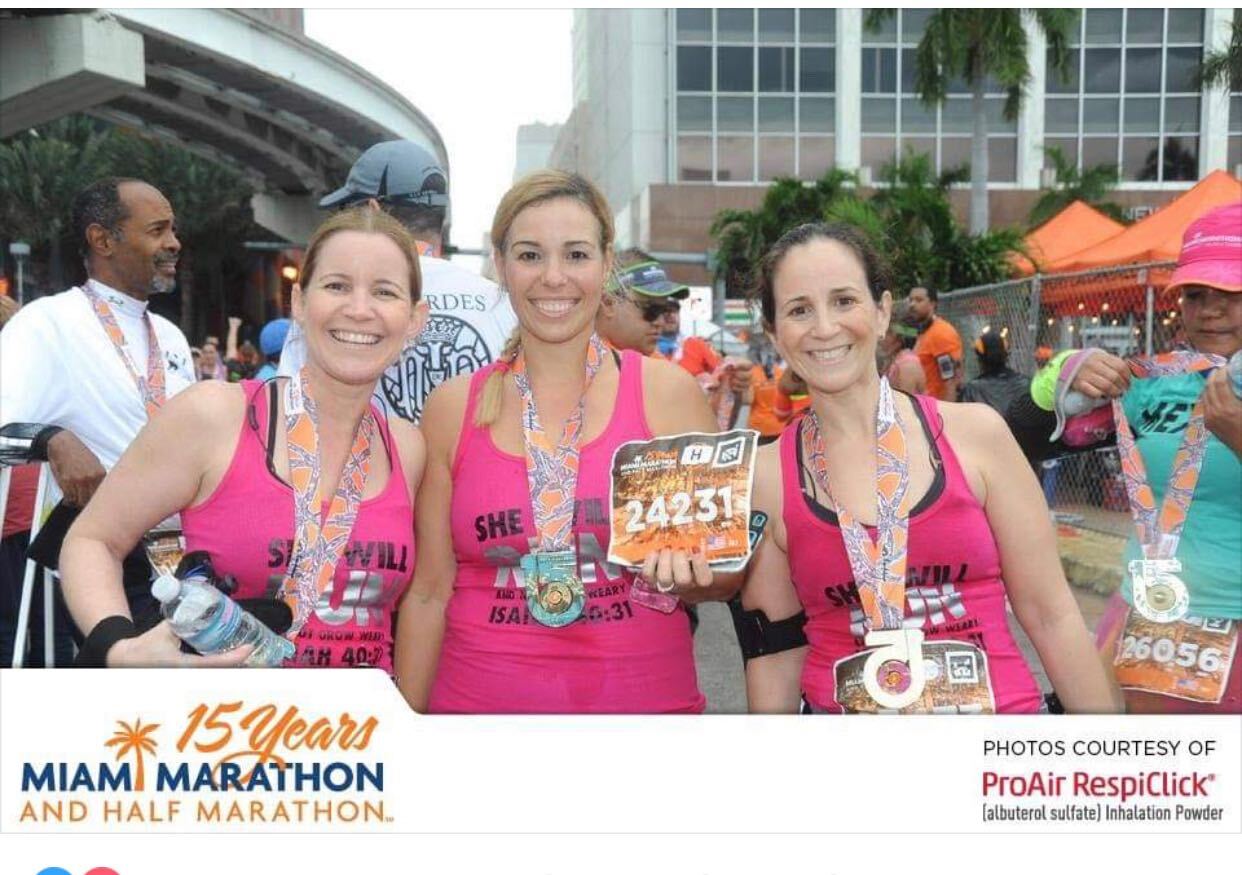 As Claryza Pujol tells it, she may have been the healthiest person ever to be diagnosed with cancer. At age 42, she was the picture of health and fitness. The wife and mother of two young teens worked out at the gym and ran every day and was an avid half-marathoner. But in early 2018, she found herself sidelined with persistent pain in her lower back and a frequent urge to urinate – symptoms she thought might indicate a kidney infection.

Mrs. Pujol, a nurse who has worked for the past 20 years as a speech language pathologist and feeding and swallowing specialist in Miami, went to see her Ob/Gyn. He performed a pelvic ultrasound, which revealed a large cyst on her left ovary. “He thought it might be a benign cyst associated with endometriosis,” she recalls. “But malignant or benign, it had to be removed quickly.”

In case it was cancer, Mrs. Pujol wanted her surgery done by an experienced surgeon and cancer specialist at Miami Cancer Institute who could remove the mass and determine right then and there if it was malignant. She was referred to Troy Gatcliffe, M.D., a gynecologic oncologist at the Institute.

Mrs. Pujol welcomed the referral and felt very comfortable after consulting with Dr. Gatcliffe. “He has a vibrant, genuine personality. He’s the kind of person you can connect with immediately,” she says. “He has a direct manner that resonated with me as a healthcare professional – that really helped me and gave me a lot of comfort.”

Dr. Gatcliffe explained to Mrs. Pujol that there was a low to moderate risk of it being cancer and, depending on what he found, additional procedures may be necessary once surgery to remove her cyst was underway. He asked her if she’d be willing to sign a consent form prior to surgery and she readily agreed. “I had complete trust in him and the level of care provided at Miami Cancer Institute,” says Mrs. Pujol. “I just said to him, ‘Do whatever you need to do – whatever happens, I trust you.’”

A surprise during surgery

Mrs. Pujol’s surgery took place in May, 2018. The minimally invasive procedure would be done with small incisions, promising a rapid recovery and faster return to normal activities, which appealed to Mrs. Pujol. During the surgery, however, Dr. Gatcliffe discovered what appeared to be a five- to six-centimeter malignant tumor hidden within the cyst. He removed that as well, and sent a sample to Baptist Hospital’s on-site pathology lab for immediate analysis while Mrs. Pujol remained under anesthesia on the operating table. The results came back quickly and the news wasn’t good. Mrs. Pujol had stage IIB clear cell cancer of the ovary.

“Young women get referred all the time with ovarian cysts. A large majority of the time, those cysts are benign but sometimes they can be malignant,” Dr. Gatcliffe notes. “Referral to a gynecologic oncologist for risk stratification and surgery is really important because an undiagnosed cancer is certainly possible, as was the case with Claryza, who was sent with what was thought to be a benign cyst and endometriosis.”

Dr. Gatcliffe mentally prepared himself to deliver the news to Mrs. Pujol’s husband, Michael, who had been worrying in the waiting room while his wife remained under observation in recovery. The two men knew each other from the gym where they both work out regularly. It was an emotional moment, made even more so because Dr. Gatcliffe knew that Mr. Pujol’s mother was also fighting her own cancer battle.

“His mother had been diagnosed with uterine cancer the year before and had recently relapsed just weeks before his wife’s surgery,” recalls Dr. Gatcliffe, who says he could only imagine what must have been going through his friend’s mind that day.

“Something must have gone awry”

When Mrs. Pujol eventually awoke from anesthesia, she knew from the time on the clock that her surgery had taken hours longer than expected. “I knew something must have gone awry,” she says. Mr. Pujol, with whom she had recently celebrated a 20th wedding anniversary, came in to see her. Even though she hadn’t yet spoken with Dr. Gatcliffe, she knew that he had found cancer during her surgery, and she knew her husband knew. They didn’t speak a word. Instead, she says, “we just held hands, looked at each other and fought back tears.”

Mrs. Pujol also knew how worried her husband must be. “He was facing the very real prospect of losing both his mother and his wife to cancer, leaving him to raise our two children by himself,” she acknowledges. Once she was able to process her situation, however, she assured him that she would be there for him and the kids. “I don’t care what it is, I’m going to live,” she promised him.

Mrs. Pujol, who describes herself as a very positive person and, first and foremost, a woman of faith, was ready for the next step in her cancer journey. At Miami Cancer Institute, Dr. Gatcliffe says, the protocol for treatment for patients with her type of cancer includes a doublet regimen of two different drugs, given once every three weeks for a total of six cycles of treatment. “This helps to fully clean up any cancer cells that may remain following surgery,” he explains.

Because Miami Cancer Institute’s Tumor Board had already reviewed her case, Mrs. Pujol never felt like she needed a second opinion. “I had complete trust in Dr. Gatcliffe,” Mrs. Pujol says. “And knowing that a multidisciplinary team of cancer specialists had also reviewed my case and agreed with his recommendations was very reassuring. I knew I was in good hands.”

Dr. Gatcliffe had warned Mrs. Pujol that, after a couple of weeks of chemotherapy, she could expect to lose her hair. “You need to tell your kids about this today, and reassure them that everything is going to be OK,” he told her. Sharing this news with her children wouldn’t be easy, though, as they had seen their grandmother lose her hair during her treatment for uterine cancer. “Seeing their grandmother like that really freaked them out,” Mrs. Pujol says. “I really didn’t want them to have to see their mother go through that, too.”

A chance comment from a friend alerted Mrs. Pujol to the existence of cold cap therapy, which some cancer patients have found helpful in minimizing hair loss, a common side-effect associated with systemic treatments such as chemotherapy. Desperate to not have her children witness their mother lose her hair like their grandmother did, she ordered one immediately, vowing to use it for at least one session to see how it felt. Her cold cap arrived just days before her first treatment.

“It was quite a production here at home the morning of my first chemo session,” Mrs. Pujol recalls. “We needed to buy a thermometer and a cooler full of dry ice, which you need to handle carefully with gloves. Once the cap reaches -48 degrees (°F), you place it on your head for the duration of your session and for a couple hours afterwards.”

Cold cap therapy is said to preserve hair during chemotherapy by inducing hypothermia in the veins of the scalp, which causes hair follicles to constrict, preventing the chemotherapy drugs from entering the follicle. “I ended up using it for all six of my chemotherapy sessions – for six to eight hours each session, then two hours afterwards,” Mrs. Pujol says.

Although she did lose some hair around the nape of her neck and sideburns – areas that the cap can’t completely cover – Mrs. Pujol says she was able to preserve eighty percent of her hair during treatment. “I bought a wig but I never needed it,” she says. Instead, she passed it on to another cancer patient who was about to go through chemotherapy, a gesture that continues to be paid forward by other patients, apparently. “As far as I know, the wig is now on its sixth patient,” she says.

“My body betrayed me”

What was supposed to be a simple surgery – removal of an ovarian cyst – turned out to be something quite different for Mrs. Pujol. The shock of a cancer diagnosis was coupled with troubling questions about how her body, which she had taken such pains to nurture and nourish and care for, could allow this to happen.

“After my diagnosis, I felt like my body had betrayed me,” Mrs. Pujol says. “I had worked so hard all these years to care for it and protect it, and I felt like it had let me down.” But as she continued her treatments, Mrs. Pujol discovered that the same body she thought had betrayed her was now starting to return to normal. “I felt so appreciative of the way my body could bounce back and heal,” she says. “It made me feel really grateful for my health and my life.”

Because she feels so blessed to be alive, she strives to give that feeling back to somebody who may be struggling with their own cancer journey. Now, whenever she goes back to Miami Cancer Institute for a follow-up appointment, Mrs. Pujol makes a point of doing something for somebody that day. “Even if it’s just saying a prayer for somebody or helping somebody do something that day, I want to pay it forward.”

“I felt so supported”

Mrs. Pujol has now been disease-free for close to four years and is back to doing everything she was before her cancer diagnosis. She continues to see Dr. Gatcliffe every three months for a physical exam and lab work and every six months for a CT scan, and she’s looking forward to the point next year when she can mark her fifth year of remission and thus be declared officially cancer-free.

Mrs. Pujol credits Dr. Gatcliffe for saving her life and says he knows what a special person he is to her and her family. “There’s no way I could possibly thank him – not only for the level of professionalism and the medical care but also for all the other things he did to support my positive outcome,” she says. “I felt so supported during my cancer battle.”

While he is extremely pleased with Mrs. Pujol’s progress, Dr. Gatcliffe is quick to share credit with the entire team at Miami Cancer Institute, particularly his nurse practitioner, Leandra Berrios, whom he says helps him every day, taking care of the patients who have chemotherapy and monitoring their progress. “During the first five months of Claryza’s initial post-operative treatment here, Leandra was probably the most important person involved in her day-to-day care,” he says.

Mrs. Pujol says that, thanks to her faith, family and friends, she never felt alone during her cancer journey. And although it may sound odd coming from a cancer survivor, she says that going through cancer turned out to be the most amazing spiritual experience of her life. “I really felt the presence of people who care about me. I felt their prayers and thoughts lifting me up,” she says.

As for Mrs. Pujol, what advice does she have for other women facing a diagnosis of ovarian cancer? “Hang on, be positive and look for the lesson in whatever trial you’re in,” she advises. “There’s always something positive to be gained from your experience.”