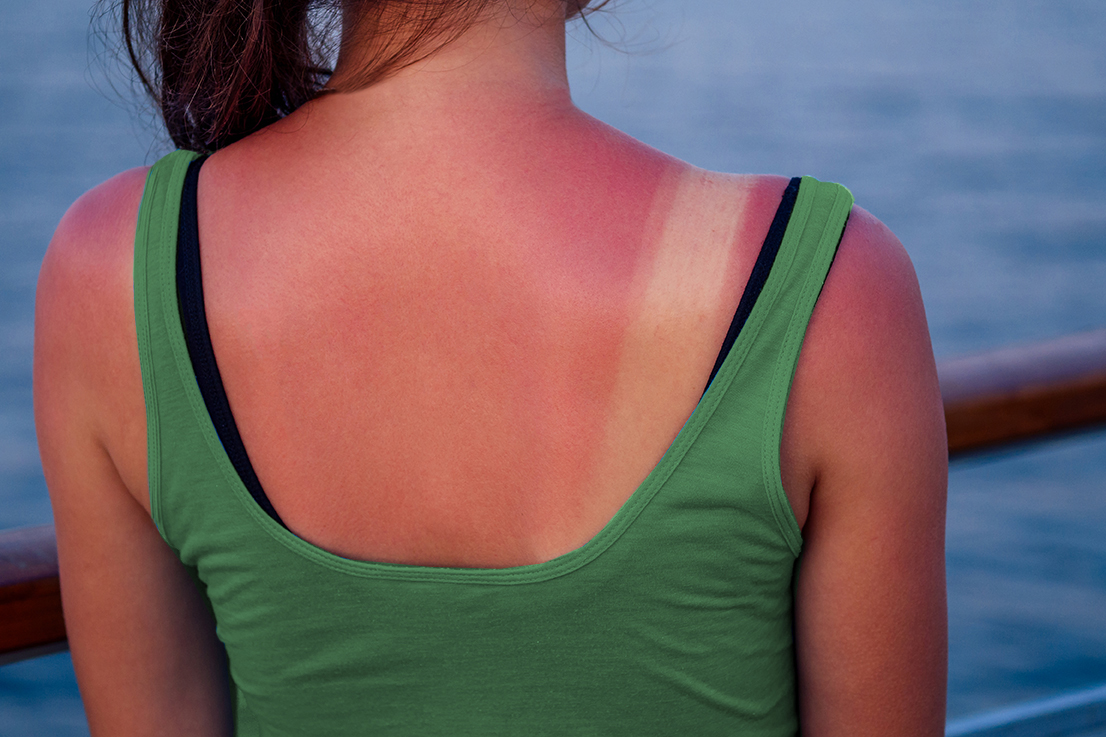 Everyone who lives in South Florida knows fully well how hot and humid the climate gets during most months of the year, peaking during summer and fall. But when it comes to protecting your skin from sun damage, many here don’t realize that the region is also high in ultraviolet (UV) radiation levels because the sun’s rays are strongest at the equator, and Florida’s low latitude translates into more UV radiation.

That may explain the propensity for intense sunburns if sunscreen is not applied well enough, if at all. And the damage from repeated sunburns is a major risk factor for skin cancer, explains Naiara Braghiroli, M.D., Ph.D., a dermatologist at Miami Cancer Institute who specializes in skin cancer treatment that uses the latest technology to monitor and diagnose high-risk patients. “Everyone should avoid the intense sun exposure on the peak hours, generally from 10 a.m. to 4 p.m.,” said Dr. Braghiroli. “In areas close to the equatorial line, especially in Miami, you do have intense ultraviolet radiation especially during the summertime, pretty much during the whole day. One good tip that you can tell your kids — they should look for their shadow and when their shadow is the same size or smaller than their height, it’s because the UV light is very strong.”

A few serious sunburns throughout childhood and adulthood can increase your risk of skin cancer later in life. More than one-third of adults and nearly 60 percent of children admit they’ve gotten sunburned within the past year, according to the U.S. Centers for Disease Control and Prevention. In a tropical climate, such as S. Florida, dehydration is also at play. Because sunburns raise your body temperature, they can dehydrate you and make you feel tired and dizzy. Drinking plenty of water helps to replace fluid losses.

“The sunburn itself can cause inflammation on the skin, so it can be very painful, and also severe sunburn can lead to dehydration, so you can lose a lot of water and can cause serious acute reactions and pain,” explains Dr. Braghiroli. “You can also have peeling of the skin in more severe cases, especially in children.”

The more sunburns you have over time, the greater the risk of all types of skin cancers.

“Chronic, repetitive sunburns can lead to skin cancers, all of them, including melanoma,” said Dr. Braghiroli. “And chronic sun exposure can accelerate the aging of the skin, including wrinkles.”

Basal cell carcinoma (BCC) is the most common form of skin cancer. About 3.6 million cases are diagnosed each year in the U.S.. BCCs results from uncontrolled growth of basal cells. However, BCCs grow slowly and cause minimal damage when caught and treated early. Squamous cell carcinoma (SCC) of the skin is the second most common form of skin cancer. It is distinguished by accelerated growth of squamous cells, which are found mostly in the tissue that forms the surface of the skin. When caught early, most SCCs are also treatable.

Melanoma is potentially the most serious form of skin cancer because of its ability to spread to other organs more rapidly. It begins in the cells known as melanocytes that are found in the deepest part of skin cells. While it is less common than basal cell carcinoma (BCC) and squamous cell carcinoma (SCC), melanoma is more dangerous.

“Intense sun exposure that leads to sunburns increases the risk of all skin cancers, but especially basal cell carcinoma and melanoma,” explains Dr. Braghiroli. “And chronic sun exposure that you get over time that may not cause sunburns, but also significantly increases the risk of all skin cancer, especially squamous cell carcinoma.”

Severity of Sunburns and When to Seek Medical Care

No sunburn is good for our health, but severe sunburns – ones that result in blisters or peeling skin and other unusual symptoms – likely require medical attention.  Sunlight is an important cause of dark spots on skin, also known as skin hyperpigmentation, and aggravates melasma (a condition in which brown patches appear on the face.), especially in people with darker skin tone. This occurs because the sunlight causes the skin to produce more melanin, the pigment that gives color to the skin.

“Signs of severe sunburn that require medical care are when you have a large area of the body that turns red, sometimes swollen, and form blisters.” said Dr. Braghiroli. “When you have a severe sunburn, you have vasodilation of the vessels of the skin and you start to feel dehydrated. If you start to feeling dizzy, having mental confusion, feeling weak, and thirsty out of normal — then you should also look for medical care.”

While not all sunburns may require medical attention, there are ways of alleviating any pain or discomfort.

“Ideally, you should avoid sunburns altogether,” said Dr. Braghiroli. “But if you do get a sunburn, you need to put good moisturizer on the affected area of skin. Some cooling creams can help alleviate the symptoms. But, once again, when it’s too severe, then you should look for medical care.”

It’s important to use a broad-spectrum, water-resistant sunscreen with a minimum of SPF (sun protection factor) of 30 to prevent incidental exposure. However, an SPF of 50 or higher is ideal for extended periods of time in the sun, including the beach or pool. Re-apply every two hours or more frequently with sweating or after time spent in the water. Protective clothing such as long-sleeved shirts and pants also help protect from harmful UV rays.

“If you do outdoor activities or sports, you should re-apply the sunscreen every two hours,” said Dr. Braghiroli. “If you spend time in the water, then you should re-apply more often. It’s very important to know if the sunscreen you are using is water-resistant. That means you’re protected for 40 minutes if you’re under water. It’s very important to see this on the sunscreen label. And if you see on the label that it says ‘broad spectrum’ — it means that you also get protection against the UVA (rays mainly linked to long-term skin damage) type of light that also plays a role in skin cancer as well.”