What first brought Wendylynn Carlisle to Mariners Hospital was a collapsed lung. She was a young waitress who had recently relocated to the Florida Keys, and she required an 11-day hospitalization to get back on her feet.

Most people want to get as far away as possible from the hospital once they are released, but Ms. Carlisle had a different idea. After what she had seen as a patient, “I thought the hospital would be a good place to work,” she says.

That was 35 years ago. Today, Ms. Carlisle, an emergency department team coordinator, is proud to be one of the longest-tenured employees currently at Mariners, part of Baptist Health.

Mariners celebrates its 60th anniversary this year, a good opportunity to look at some of the people who have served as pillars of the hospital in Tavernier. Over the years, Ms. Carlisle made the rounds by working in several departments after she was hired in 1987.

“I started off in the kitchen, and I lasted two weeks there,” recalls Ms. Carlisle, 58. “It wasn’t my thing, so they put me on the switchboard for a little bit, and then in outpatient and admitting.” When she was assigned to the emergency department, she knew it was the perfect fit, “and I’ve been there ever since.”

In the early days, the hospital was quite different than today because the community was so much smaller. Ms. Carlisle laughingly recalls one doctor who would drive down from Miami to work an emergency room shift before the hospital became part of Baptist Health — and bring his lounge chair and bathing suit so he could sunbathe in the parking lot. “They weren’t very busy,” she says.

A lot has changed since then.

Mariners was opened as Overseas Hospital by Nate Levin, M.D., a prominent Miami surgeon who enjoyed weekends in the Keys and the father of Baptist Hospital plastic surgeon Joel Levin, M.D. The hospital accepted its first patient in May 1962. Over the decades it changed ownership several times as it struggled financially to meet the needs of the Upper Keys community. In 1995, the hospital, by then renamed Mariners and community-owned, merged with Baptist Health.

At that time, the hospital’s current building didn’t even exist. That facility opened in February 1999, tripling the old hospital’s square footage. It was the realization of a dream for many locals who had fought to keep Mariners going.

“The old hospital, it was just a tiny building. You could sit in the ER and talk to someone down at the nurses’ station because they were 40 feet away from you, literally just down the hallway,” Ms. Carlisle recalls. The staff and employees were consulted on plans for the new hospital’s home, adding their expertise. Nurses, for example helped design the layout of the patient floors.

Ms. Carlisle clearly remembers the excitement during the transition from the old building to the new hospital. “Going in there for the first time after construction was really something,” she says. “They had this big grand opening and everyone was so impressed. It was so bright and new, and there was so much space.”

Being associated with Baptist Health has allowed the hospital to expand and include orthopedics, cancer treatment, neurology, advanced imaging equipment, improved emergency care and more, she says. It also gave Mariners wider resources on which to draw, if needed. The hospital continues to evolve as it strives to serve residents and visitors. “We’re here for the community, and the community knows that.”

One thing that hasn’t changed over the years, however, is the family feeling among the staff, she says. Employees support each other both on and off the job. “My favorite part of my job is the people I work with, because everybody watches out for everybody.”

Navigating the height of the pandemic was challenging because the hospital saw many gravely ill people. But the staff pulled together, as usual. They are used to dealing with challenges, as they proved when they returned to the hospital after Hurricane Irma and found it flooded. Everyone adjusted, shifting where needed so they could get back to caring for the community as quickly as possible.

“We had the maintenance team in the kitchen, and people worked in different departments,” Ms. Carlisle recalls. “It’s a very close-knit group at this hospital. We work together well.”

Ms. Carlisle is proud to be part of Mariners as it marks its 60th anniversary, and she looks forward to helping it attain new milestones in the future. While the emergency department can be hectic, it’s rewarding to help people, she says. Experience has taught her to remain steady even on the busiest of days. Plus, she has confidence in her co-workers.

“I’ve pretty much seen everything,” she says, “and I know it's going to be OK.” 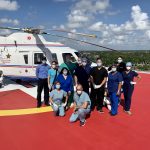 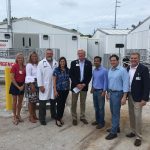 Resiliency in the Florida Keys a Year After Irma