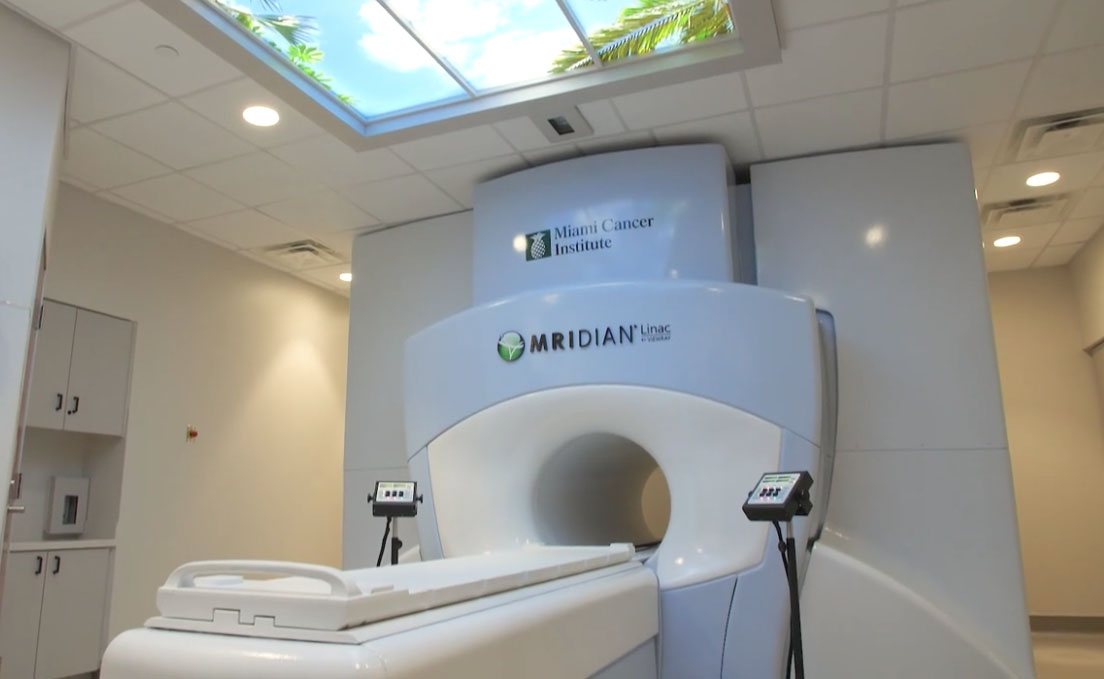 Patients with inoperable pancreas cancer may benefit from an advanced form of radiation therapy now available at Miami Cancer Institute. The technology delivers an unprecedented high dose of radiation over just five consecutive days and is showing promise in extending overall survival and improving quality of life.

The ViewRayTM MRIdianMR-Linac technology is used in conjunction with continuous real-time MRI scans,allowing for millimeter accuracy and adapting to daily changes in a patient’sinternal anatomy. It is painless, non-invasive and requires no anesthesia orneedles. Miami Cancer Institute was the second cancer center in the U.S. tobegin treating patients with this technology in April 2018.

“A significant number of our patients havesurpassed the expected survival for this deadly disease, with many aliveseveral years after their initial diagnosis,” said MichaelChuong, M.D., director of MRI-Guided Radiation Therapy at the Institute anda radiation oncologist specializing in gastrointestinal cancers. Dr. Chuong isencouraged that patient survival beyond two years after initial diagnosis maybe more than doubled through the use of the higher radiation dose.

The Miami Cancer Institute studyincluded 35 patients ranging in age from 34 to 89 years and reported that oneyear after SABR nearly 90 percent of patients had their cancer controlledlocally. Some patients who initially had inoperable pancreas cancer ultimatelywere able to undergo successful surgery because of their excellent response toSABR.

Some 57,600 people in the U.S.will be diagnosed with pancreatic cancer this year, according to the AmericanCancer Society. While the death rate for some cancers has dropped significantlyin the last decade, it has not improved for pancreas cancer, which often goesundetected until it is an advanced stage. Because the pancreas sits in theabdomen near the stomach, small intestine, liver and spleen, and involves manyblood vessels, it can be difficult to remove surgically and radiation must beprecisely delivered to avoid damage to nearby structures.

In addition to being effective,the new radiation technology is well tolerated by patients. “It is remarkablethat we have seen such little treatment toxicity given the incredibly highradiation dose that is delivered to tumors in the pancreas that are surroundedby ― and sometimes literally touching ― the stomach and intestines,” Dr. Chuongsaid. “Patients are in and out within about an hour. They go back to work orplay golf and do their normal activities.”

Dr. Chuong is a nationalco-principal investigator of a phase 2 clinical study on the MRIdian Linacknown as the SMART (StereotacticMRI-guided On-table Adaptive Radiation Therapy (SMART) trial. It iscurrently enrolling patients. Dr. Chuong encourages those with inoperablepancreatic cancer to speak with their doctors about receiving MR-guided SABR,ideally at a high-volume center with significant experience such as MiamiCancer Institute. The Institute offers a host of other clinical trials andcutting-edge treatments for pancreatic cancer as well.

The MR-Linac is also being used atMiami Cancer Institute to improve outcomes for patients with many othercancers, including those of the prostate, liver, lung, esophagus, rectum,adrenal gland and kidney.