The recently announced 2015 Nobel Prize in Chemistry honors the broad scientific discoveries that, among other things, have fueled many advances in cancer research — with more on the horizon.

Over decades of study, the three winning scientists — Tomas Lindahl, Paul Modrich and Aziz Sancar — showed how cells repair damage to DNA molecules, a vital task that supports the growth and survival of every living organism, from plants to mammals.

“Their work has provided fundamental knowledge of how a living cell functions and is, for instance, used for the development of new cancer treatments,” the Nobel committee stated.

When Miami Cancer Institute at Baptist Health is completed in late 2016, it will include a research facility.

“The Nobel award was based on the fundamental recognition that mammalian cells have four paths of DNA repair,” said Jeff Boyd, Ph.D., associate deputy director of Translational Research and Genomic Medicine at Miami Cancer Institute. (pictured below). “This was groundbreaking work.” 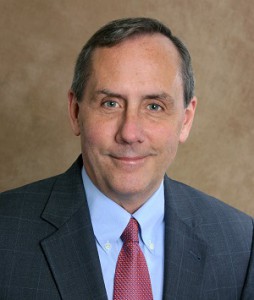 Cancer is the result of genetic mutations that turn a normal cell into a cancer cell; that’s why the Nobel winners’ work with DNA repair is so relevant, explained Dr. Boyd, who also serves as professor and chair of the Department of Human and Molecular Genetics at Florida International University’s Herbert Wertheim College of Medicine.

By figuring out various pieces of the DNA repair cells, the Nobel scientists laid the groundwork for the “translational research” that has created medical applications. They include precision therapies that target cancer cells at the molecular level.

“All the DNA packaged into a cell has to be faithfully replicated every time a cell divides into two daughter cells,” Dr. Boyd said. “If not for the fundamental process of DNA repair, we would all be getting cancers all the time.”

Of course, gene mutations do occur and are passed on to offspring. Some cause disease. Perhaps the most well-known inherited cancer involves mutations in the BRCA1 and BRCA2 genes, which can lead to breast and ovarian cancer. Lynch syndrome, which puts people at risk for colorectal cancer, has been linked to mutations in the MLH1, MSH2, MSH6, PMS2 and EPCAM genes. Dozens of other cancer-related gene mutations have been identified.

Discovering Pathways to ‘DNA Repair’
“A large portion of cancer susceptibility genes are, not surprisingly, involved in DNA repair. Hence the importance of the discovery of these pathways for DNA repair,” Dr. Boyd said. “Understanding that these are the genes that mutated has given us enormous insight into how cancer develops in these at-risk individuals and how to prevent it.”

The Cancer Institute’s research program will perform clinical trials and hands-on research to continue to develop techniques for cancer prevention and treatment plans designed to target a patient’s individual cancer.

For example, drugs have been developed that kill cancer cells by causing overwhelming damage to their DNA. This targeted treatment can be easier on patients because only the cancer cells are pinpointed. Conventional chemotherapy does not differentiate between cancer and normal cells, killing both and often causing side effects such as hair loss, low blood counts and nausea.

“We have started using our knowledge of defective DNA repair as an Achilles heel of various cancer types,” Dr. Boyd said. “It’s a very effective strategy for cancer therapy.”