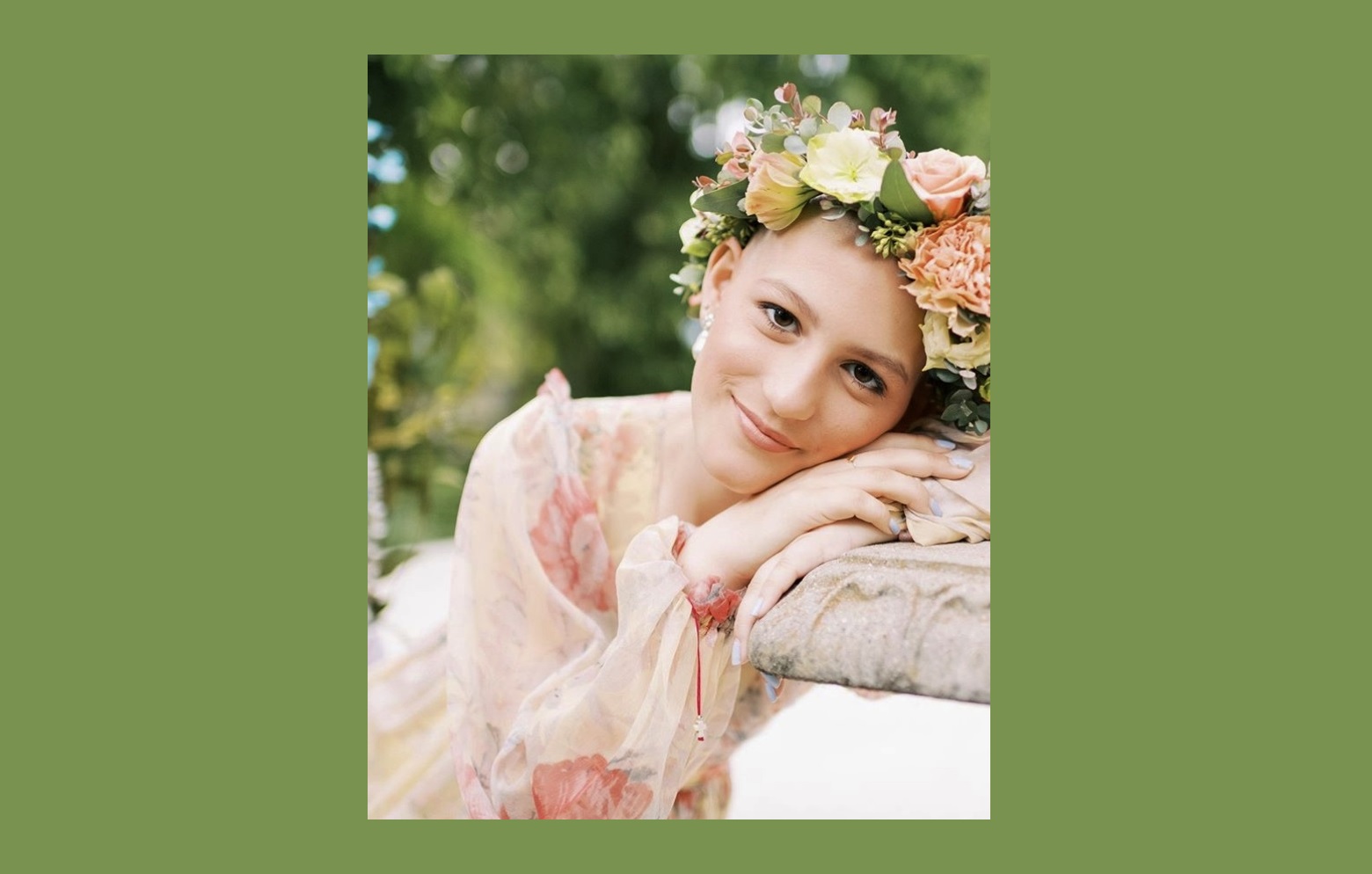 When Margot Palma’s family and friends cross the finish line of the virtual ZooRun5k on October 10, it will mean more than collecting another medal. They will be celebrating the end of treatment for 15-year-old Margot, who was diagnosed with Ewing sarcoma, a rare form of cancer, in January.

“It’s really symbolic,” saidMonica Palma, Margot’s mother. “It’s the finish line for her treatment. Thefinish line is the hardest part of any race. You can see the ending. Your bodywants to rest, but it’s not time yet.” 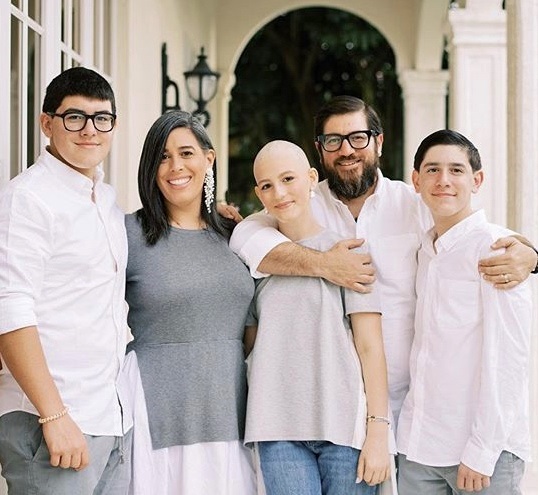 Supporting Margot, family and friends shaved their heads when Margot began losing her hair due to chemotherapy. In an additional show of solidarity and to recognize Margot’s love of animals, they started Miles for Margot, running or walking 60 miles leading up to the October race. The distance matches the number of chemotherapy and proton radiation treatments Margot will receive at Miami Cancer Institute.

It was about a year ago thatMargot first complained of lower back pain. “At first we didn’t think anythingof it,” recalls her mother. “But it began to get worse. We made several tripsto the pediatrician, where it was suggested that she might have bruised hertailbone.”

When Margot didn’t improve, theythought the problem could be digestive and added more water and fiber to herdiet. She lost 15 pounds between August and December. The girl who lovedtheater and dance at Palmetto Senior High ― where she was a freshman at thetime ― had no energy. The pain persisted and worsened.

Finally, severe discomfort sent Margot to Baptist Children’s Emergency Center. It was January 8. The next day, they had their answer. Margot had a lesion in her sacrum, the bony pelvis below the spine. It extended into her pelvic cavity. After a biopsy, pediatric oncologist Doured Daghistani, M.D., of Miami Cancer Institute, told them it was Ewing sarcoma.

Sarcomas grow in connective tissues and are rare, but are more common in children than adults. Ewing sarcoma can occur in the pelvis, thigh, lower leg, upper arm or rib.

Margot immediately beganchemotherapy, with a plan to continue treatment with proton therapy and thensurgery. The COVID-19 pandemic made care even more tricky and put a strain onthe family. “Miami Cancer Institute did an amazing job of making everythingsafe,” Monica said. “But no one could visit. We even debated having our twosons live elsewhere so that they could still continue activities, but wedecided we’d rather stay in a bubble as a family.”

The sacrifice was worth theeffort. After months of chemotherapy, around Easter, a scan showed thatMargot’s tumor had shrunk 99 percent. “It was miraculous,” her mother said. “Wegot the news that she wouldn’t need surgery, which would have been verycomplex, and we could go straight to radiation treatment.” 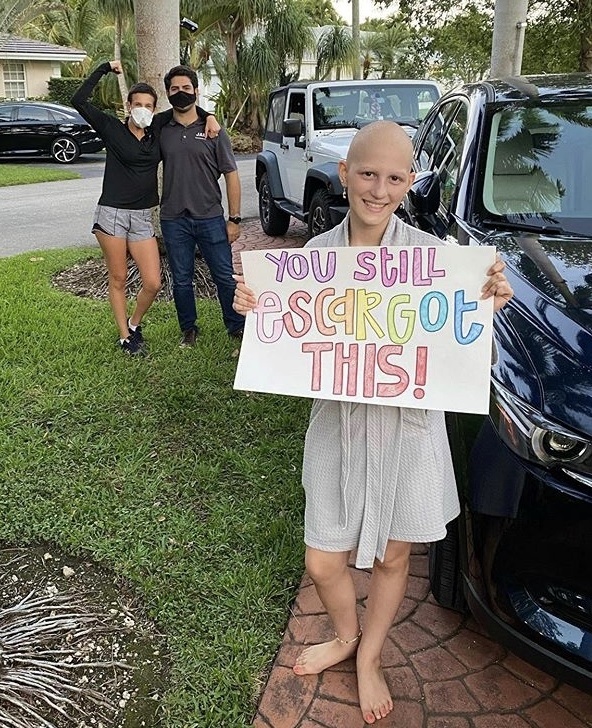 During treatment, she picked up the nickname “Margot Escargot.” Ever since, the snail has become somewhat of a personal mascot.

For Margot, radiation was 36 sessions in a row (nearly every weekday) of specialized proton therapy, a sophisticated form of radiation that targets the tumor and any leftover cells with high precision and reduces the likelihood of long-term side effects. Miami Cancer Institute is the only cancer center in the world that offers all radiation technologies under one roof, and one of a handful that has proton therapy.

“With proton therapy, we can deliverhigher doses and improve the chance of a cure while reducing potential damageto nearby organs,” said Matthew Hall, M.D., the lead pediatric radiationoncologist and an expert in proton therapy at Miami Cancer Institute. “Whendone each day, it causes irreversible damage in the cancer cells, enabling usto maximize our ability to cure the cancer and kill any cells that wereresistant during earlier treatments.”

“I would advise anyone with achild slated for radiation to ask for both proton therapy and reproductivespecialist consultations,” Dr. Hall said. He also believes it is critical toallow young patients and their families to participate in decision-making andto ask questions about treatment and fertility.

At Miami Cancer Institute, Margotalso took part in several virtual child life activities, including a cookingclass, a trip to a dolphin facility in the Keys and a talk with a polo playerwho was a childhood cancer survivor. “He even invited us to see his horses inperson when it is safe,” Monica said. “I absolutely love her team at theInstitute. I call them our angels. They are amazing.”

Back to the Race

As Margot finishes treatment, sheis excited about her future and looks forward to the trip to Disney World shemissed earlier in the year. “I’m feeling good,” she said. “I want to be in myschool’s shows again and I want to travel.”

Benefiting the Zoo Miami Foundation and West Kendall BaptistHospital, the 2020 virtual ZooRun5k takes place October 2-11 and honorsconservation and healthcare heroes, two causes close to Margot’s heart. You canjoin her team and register for the run at  www.ZooMiami.org/run.