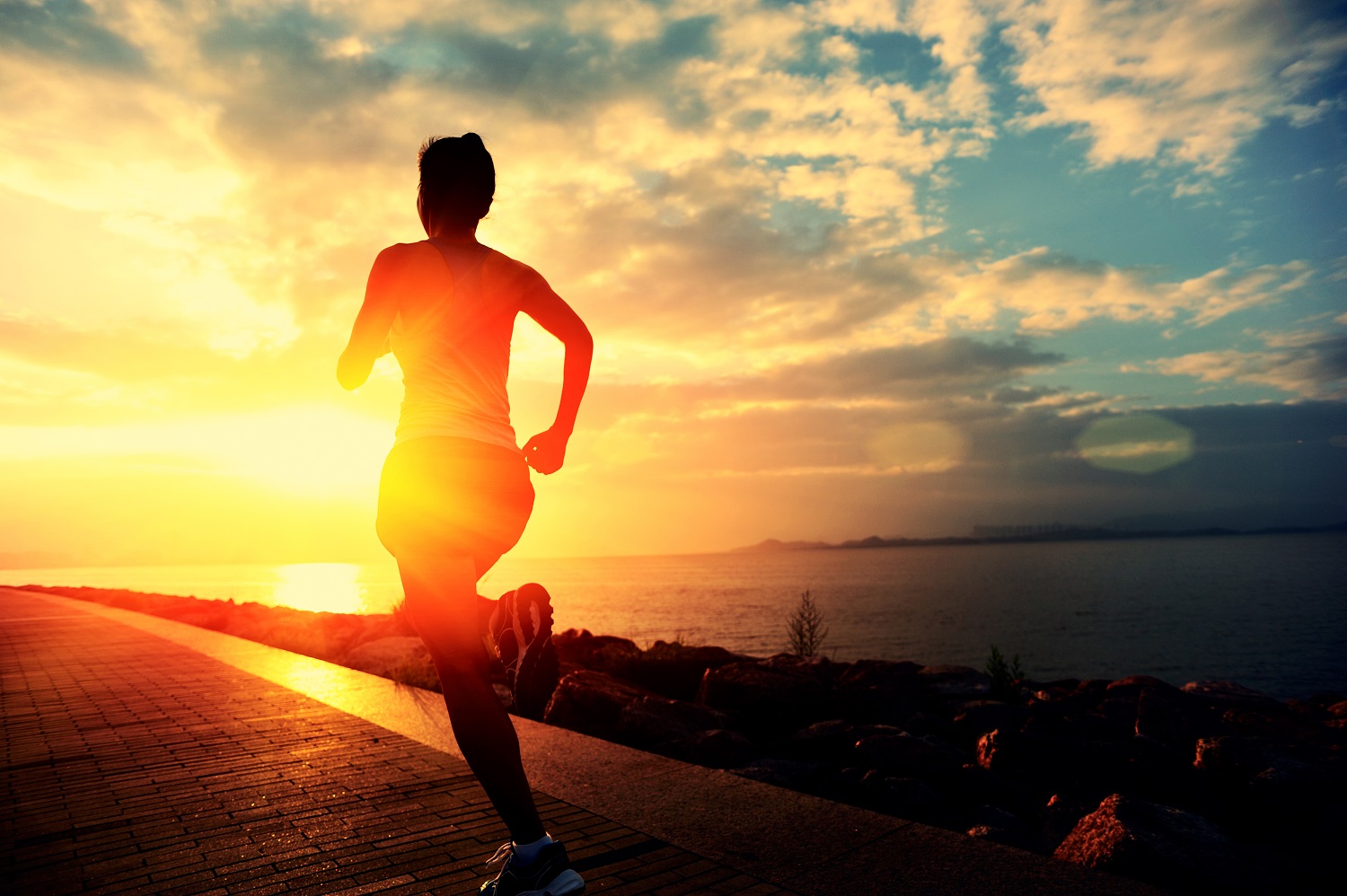 Marathon Profiles 2017: Why They Run

Participants training for the Miami Marathon and Half Marathon on January 29 share their motivations for running. Here are some of their stories in the first installment of this year’s marathon profiles (the second batch of stories will be published next week.) Baptist Health is a sponsor and the official medical provider for the event.

Fran Boyd, 50: “It makes you happy to inspire people.” 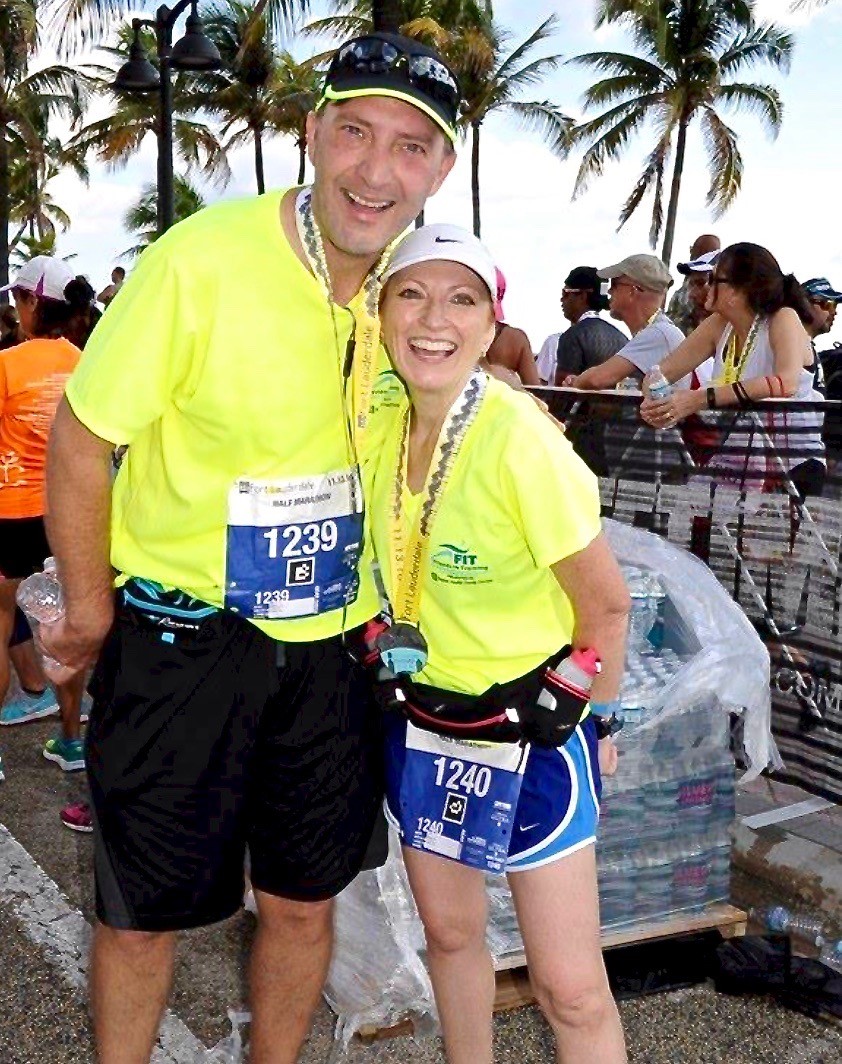 Being a runner helped Fran Boyd cope with breast cancer and recover from the treatment. She suffered none of the side effects of chemo she was warned about, a fact she and her healthcare team attribute to the physical and psychological benefits of running. “My oncologist and nurses were amazed at how I felt through everything — no sickness at all. I felt great.”

At her oncologist’s request, a photo of Ms. Boyd crossing a marathon finish line less than a year after she finished treatment hangs in the cancer specialist’s examination room. At a follow-up visit, Ms. Boyd wondered about the impact of her photo on newly diagnosed patients.

“People sit here and they are so scared,” her doctor told her. “And it is terrifying. That’s when I point to your picture and say: ‘This woman went through it. And this woman is running marathons.’ It gives them hope that there’s a light at the end of the tunnel.”

After running her first marathon in 2006, she took a break from long distances until 2011. At the end of 2013, when she lived in Oklahoma, she got the cancer diagnosis. “I had a great support group of runner friends. Sometimes I walked when they ran. I didn’t push myself,” Ms. Boyd said.

Ms. Boyd and her husband, Brian Boyd, (pictured) moved their digital marketing company to Pompano Beach in 2015. One day, she was intrigued by a group of runners clad in bright yellow shirts heading along A1A. She joined the Friends in Training (FIT) running group, led by Marcela Todd. So did Mr. Boyd, who had never run before.

“She needs this to be sane,” Mr. Boyd said. “And I need her to run so that we have a good, healthy marriage.”

Ms. Boyd ran a marathon in Berlin with her FIT group and has signed up for one in Toyko in February, the month after she runs the Miami Marathon. “Marcela got me on this kick with the World Majors — six key races all over the world,” Ms. Boyd said.

The mother of a grown son and daughter, Ms. Boyd is focused on the running lifestyle and living her life to the fullest.

“Running helps me de-stress,” she said. “I like the camaraderie and the friendships and setting goals and really just trying to stay healthy.”

Brian Boyd occasionally accompanied his wife, avid runner Fran Boyd (profiled above), on walks and runs when she was coping with breast cancer. The focus was on supporting her. “The caregiver job is thankless and very hard,” he said. “I did the best I could to be a caregiver for Fran.”

He was also stressed with their growing digital marketing company, which they moved to Pompano Beach from Oklahoma in 2015, after Ms. Boyd’s cancer treatment was over.

His wife was concerned, too. “He wasn’t eating that great. I said, ‘I’m not going to survive cancer and then you die of a heart attack.’ ”

Yes, it was time to attend to his own health — and have some fun with Fran. The Boyds joined Friends in Training (FIT), a Fort Lauderdale running group, after settling in South Florida. The welcome he received at FIT has helped him transform his life.

“I love this group because they didn’t judge me for being an old man who’s not fit,” Mr. Boyd said. “They have a pace for everybody, whether you run, run and walk or just walk.”

He couldn’t believe how easy it was when he was jogging with a pack of friendly people. “We ran one mile, then two miles, then four miles, then five, then on and on.”

Before he knew it, FIT Head Coach Marcela Todd had signed him up to run the Miami Marathon. It will be his first, and he feels ready. “This morning I ran 10 miles and it was like cutting butter with a hot knife,” Mr. Boyd said.

A year and a half after starting to run, he now weighs a healthy 210 pounds and eats healthy foods, watching his portion sizes. “I recently wore a tux at a wedding and I looked really good, very studly.”

Running together has added a dimension to his relationship with his wife. “Fran and I have something more in common now besides work.”

He also has made friends in the running group, and the support of others kept him going during his longest run to date, 18.5 miles at a 12-minute-mile pace. “It was pretty tough,” he said. “But I finished with everyone.”

Michelle Kirk, 29: “Setting goals and reaching them — that’s what keeps me going.” 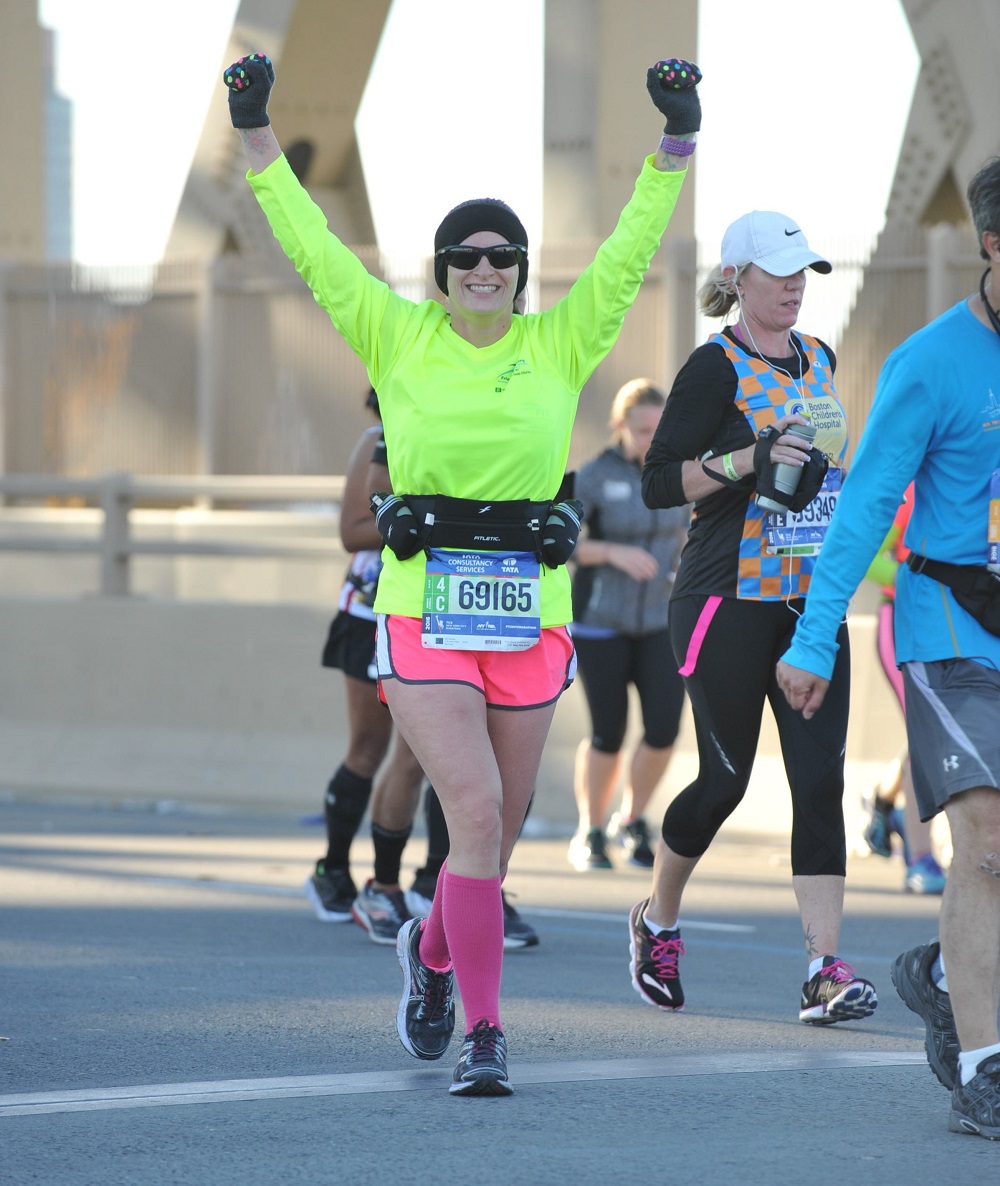 Michelle Kirk started running a few years ago, but had to quit exercising when she got pregnant with her first child and developed a high heart rate. After a 70-pound weight gain during the pregnancy left her feeling depressed, she was eager to get back to running. So, as soon as her daughter was born in early 2015, in a bold move, she signed up for the 2016 Walt Disney World Marathon in Orlando.

She had just under a year to train for her first marathon while caring for her newborn and getting back in shape. While many people might shake their head in disbelief, Ms. Kirk, a teacher, is all about “setting goals and reaching them — that’s what keeps me going.”

When the big day came, she had lost the pregnancy weight and was ready to run. “It was the craziest experience — so many ups and downs during the whole thing,” Ms. Kirk remembered. “Crossing the finish line was one of the best feelings I’ve ever had.”

The Miami Marathon will be her third — after the Disney run. She entered the lottery for the New York City Marathon and got in, completing her second marathon in November back in her hometown.

Ms. Kirk, who coaches a Fort Lauderdale-based group in the Friends in Training (FIT) running program, exploded onto the social media scene last summer after her Facebook post went viral. During a run in her Pine Island Ridge neighborhood, a man on a bicycle blocked the sidewalk where she was jogging while pushing her 18-month-old in a stroller. He then made inappropriate comments about her breasts.

She took a selfie and posted it on Facebook group for runners, and her own page, sharing her outrage over what had just happened. Speaking directly to the man, she vowed: “I will NEVER stop doing what I love and I love myself way too much to have your hate bring me down!”

She was overwhelmed by the response. “By the time I got home from my run, I saw that it was shared numerous times and people were commenting — all on my side.” Ultimately, people from around the world wrote that she had inspired them to start running and to develop a more positive image of their body.

As a FIT coach, Ms. Kirk enjoys helping runners reach new goals and keep them on pace to complete long-distance runs they didn’t think possible. “It’s a beautiful thing,” she said. “I’ve met so many different people through running.”

Jessica Mas, 47: “When you see someone light up when they challenge their body
and accomplish things they didn’t know they had in them — that’s pretty amazing.” 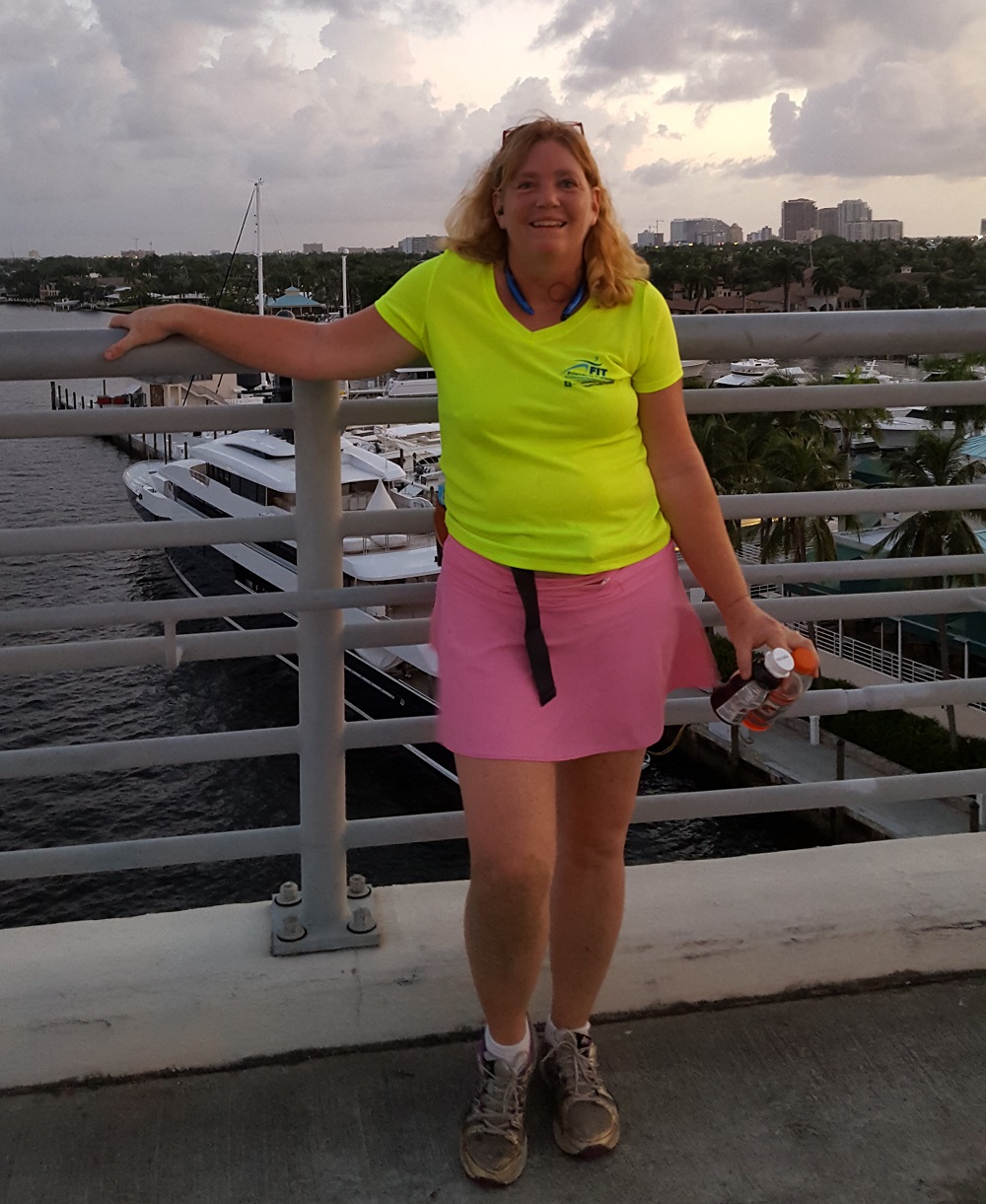 Running became Jessica Mas’ sudden, unplanned lifeline when she was 12. “My mom had a stroke and I would come home from school and immediately have to take care of her until dinnertime was over,” Ms. Mas recalled. “I started running just to relieve the stress of being her caregiver.”

She took her dog on long runs over the weekend when her dad took over her mom’s care. Then her mother died, “and I stopped running.”

Ms. Mas rediscovered running in college, inspired by a physical education professor who led students on long, scenic runs around lakes and along mountain trails in Virginia. “It was beautiful. That’s when I really fell in love with running.”

The Margate resident enjoyed running for causes, especially the Leukemia and Lymphoma Society, which would give runners bracelets to wear bearing the name of a person struggling with cancer. She often raised enough funds to get free plane tickets to society runs in “really beautiful places,” such as San Francisco.

Ms. Mas started running marathons at age 24 and had completed about a dozen when she was diagnosed three years ago with stage 3 breast cancer. It had spread to her lymph nodes. “I used to run with a name on a bracelet; now all of a sudden, I’m a name on a bracelet,” she said.

The mother of a 14-year-old daughter, Ms. Mas underwent chemotherapy, radiation and several surgeries, including a mastectomy. “I wondered if I could ever be a runner again.”

But last March, she slipped on her running shoes and gave it a try, joining the Friends in Training (FIT) running group every Saturday morning in Fort Lauderdale.

With the support of FIT and her fiancé, her running passion returned. “What I love about this group is they don’t care if you’re a walker or a fast athlete. They take couch potatoes and turn them into marathoners even if they walk the whole thing.”

She’s doing the Miami Half-Marathon this month and, in February, the Fort Lauderdale A1A Marathon.

Running always has been more than just a physical activity for Ms. Mas, as a recent run along the Deerfield Beach shore revealed. With the ocean breeze cooling her face and the tropical tableau feeding her spirit, she witnessed a marriage proposal and a maternity photo session on the beach.

“I saw so many beautiful things that gave me hope and filled me up for the rest of the day.”