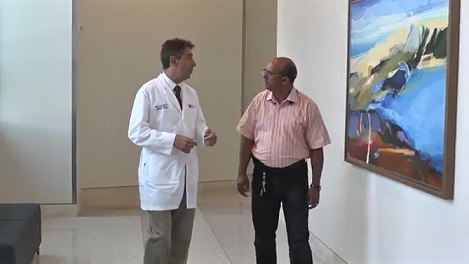 For the thousands of men treated with radiation therapy for prostate cancer each year, a new procedure is providing a lot of relief.

Marcio Fagundes, M.D., medical director of radiation oncology at Miami Cancer Institute, is the first certified physician in South Florida to use a soft gel-like material, called SpaceOAR, to lessen the side effects some prostate cancer patients experience because of radiation.

The procedure also reduces discomfort some prostate cancer patients experience during radiation treatment. According to Dr. Fagundes, more than 10 percent of men who receive radiation therapy without prostate-rectal spacing develop rectal pain during treatment. When treated with the gel, the risk of pain decreases to 2.7 percent, he says.

“In addition, patients who undergo radiation therapy with prostate-rectal spacing are much more likely to maintain normal bowel function during and after treatment,” adds Dr. Fagundes.

Using the gel for prostate cancer patients was approved by the Food and Drug Administration in 2015, and Dr. Fagundes was one of the first physicians in the U.S. trained to implant it. He has since treated more than 300 patients and teaches other physicians on its use, making him a leader nationwide in this type of treatment.

Because the gel solidifies in eight seconds, Dr. Fagundes says the technique requires precision and expertise to control and spread it properly in the small cavity between the prostate and rectum. The gel remains stable during radiation therapy and is then gradually absorbed by the body after treatment has been completed.

Radiation therapy for prostate cancer is typically five days a week for eight weeks. The radiation oncologist implants the gel using ultrasound-guided technology the day before patients get CT scans used for radiation treatment planning. Local anesthesia is used for what is typically a 20-30 minute procedure, and patients walk out of the office. They are able to return to normal activities immediately.

“Patients say the procedure is easy for them, and they feel less discomfort than a prostate biopsy,” Dr. Fagundes said.

The Baptist Health South Florida News Team was there to capture Dr. Fagundes speaking with a patient he treated with the gel at Miami Cancer Institute. Watch the video now.