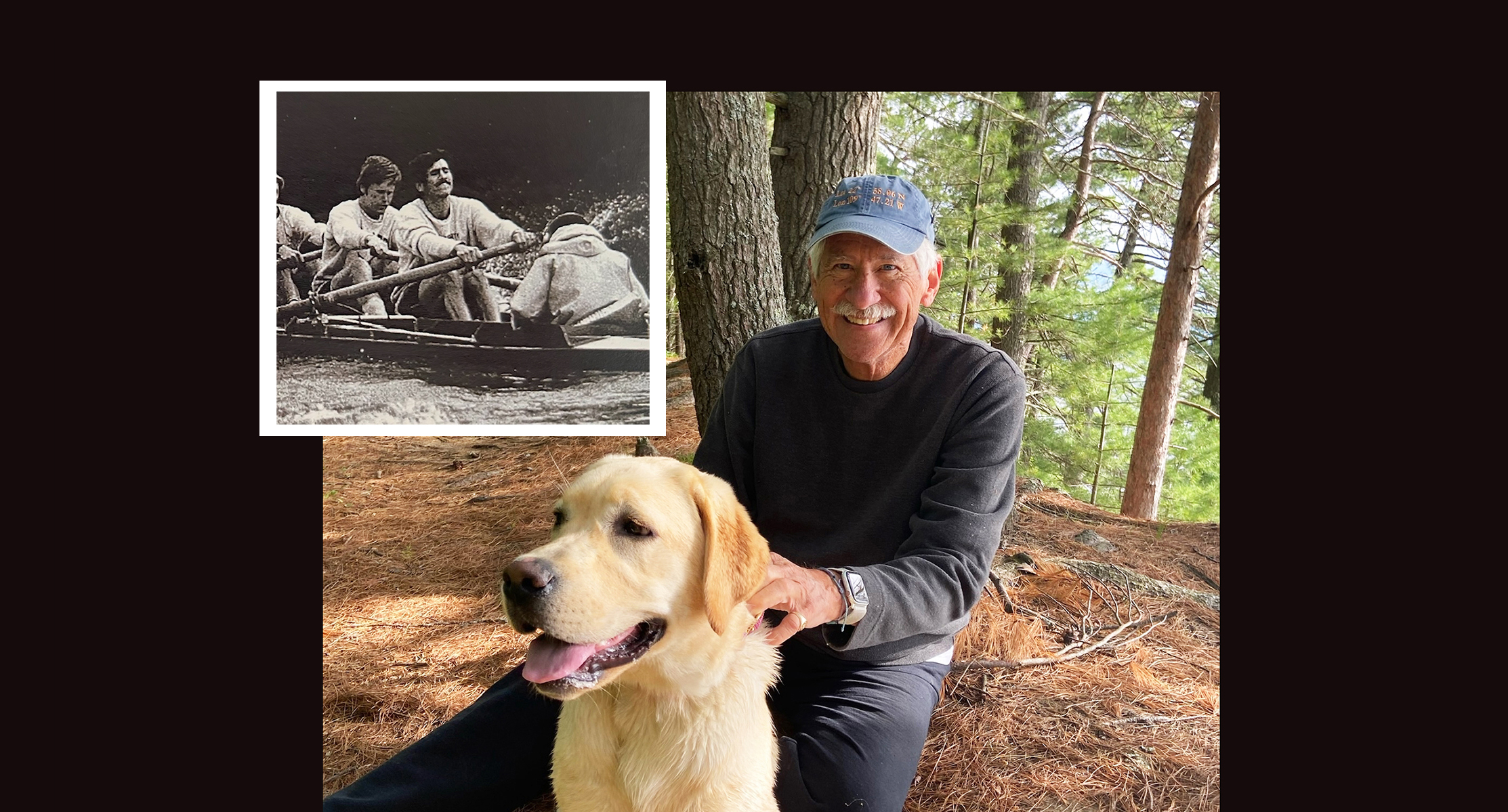 It was 50 years ago when Lawrence “Monk” Terry, now 76 and a resident of Coral Gables, won a silver medal with the U.S. rowing team at the 1972 Olympics in Munich, Germany. He served as the “stroke” on his crew. That’s the rowing term for the most important position, the one that sets the pace for the rest of the rowers.

Considered a standout on the Harvard rowing team before taking part in his first Olympics (the 1968 games in Mexico City), Mr. Terry has kept fit by playing golf, swimming, canoeing and continuing his passion for rowing at Masters rowing events, where participants are in their 60s, 70s and 80s.

To say that his life was going smoothly would be an understatement – until one otherwise normal day – April 6th — when the term “stroke” would take on a new meaning for Mr. Terry. He recalls cleaning mold off a wall in front of his home, and then having lunch and retreating to his study to take care of some paperwork.

“I don’t remember exactly what I was doing … I leaned down to get a pencil or something that I had dropped,” he says. “I remember being on the floor stretching my back, but also thinking this isn’t quite feeling right. I realized my left side was not as strong as my right. Although I could still move my left arm and I still had strength in it, but not enough to get up. And I was thinking — this is very strange.”

Fortunately, his wife, Kitty, heard something and entered the study, finding Mr. Terry experiencing some telltale signs of a stroke.

“My back is hurting me, I told her,” recalls Mr. Terry. “She said: ‘I don’t think you’re right.’ And I said: ‘No, I’m fine.’ By this time, I could not feel my left side and I was not speaking correctly. She said: ‘I’m going to call 911.’ And I said: ‘I’ll be fine’ — which is a typical male response, of course. And, of course, I later found out that she had already called them.” 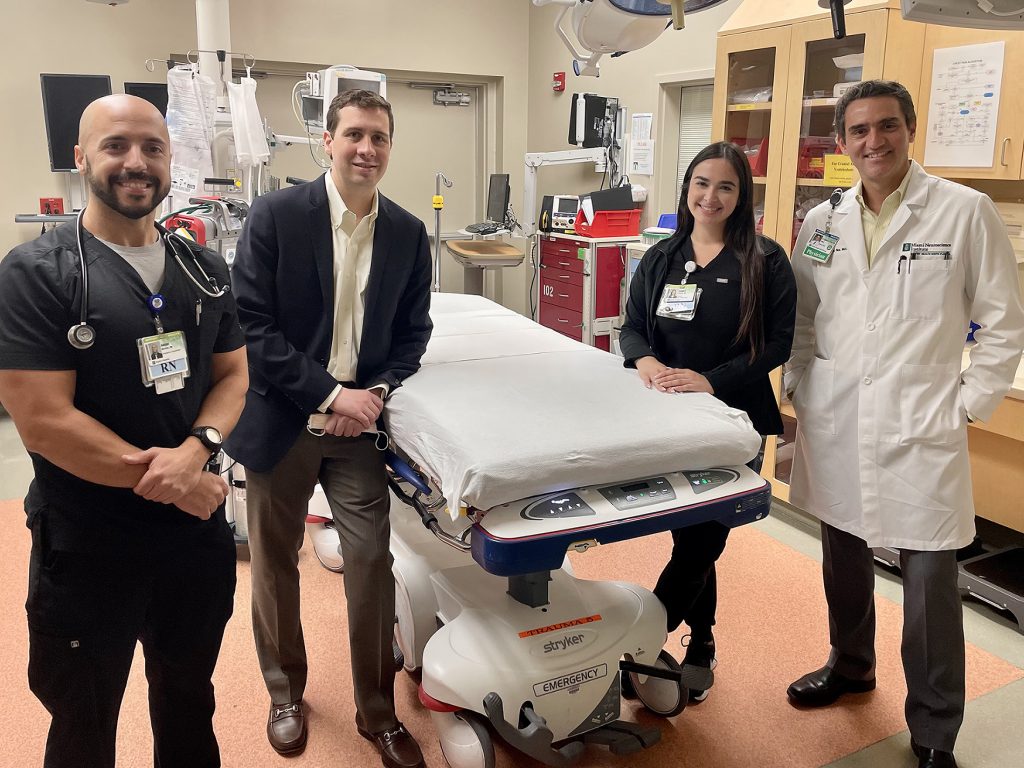 Mr. Terry’s trip to Baptist Hospital’s Comprehensive Stroke Center at the Miami Neuroscience Institute would be swift and comprehensive, utilizing the state-of-the-art “telestroke” service inside the Coral Gables Fire-Rescue vehicle. The innovative telemedicine program allows paramedics to consult directly with neurologists, trauma surgeons or other medical professionals through a secured video system.

By the time he arrived at Baptist Hospital, the stroke team was mobilized and ready to treat him.

Felipe De Los Rios, M.D., director of the Stroke Program at Miami Neuroscience Institute, was the one who assessed Mr. Terry’s condition via the telestroke technology. Robert Wicks, M.D., the co-director of cerebrovascular surgery and director of the Neurosurgical Anatomy Laboratory at the Institute, led the team treating Mr. Terry. 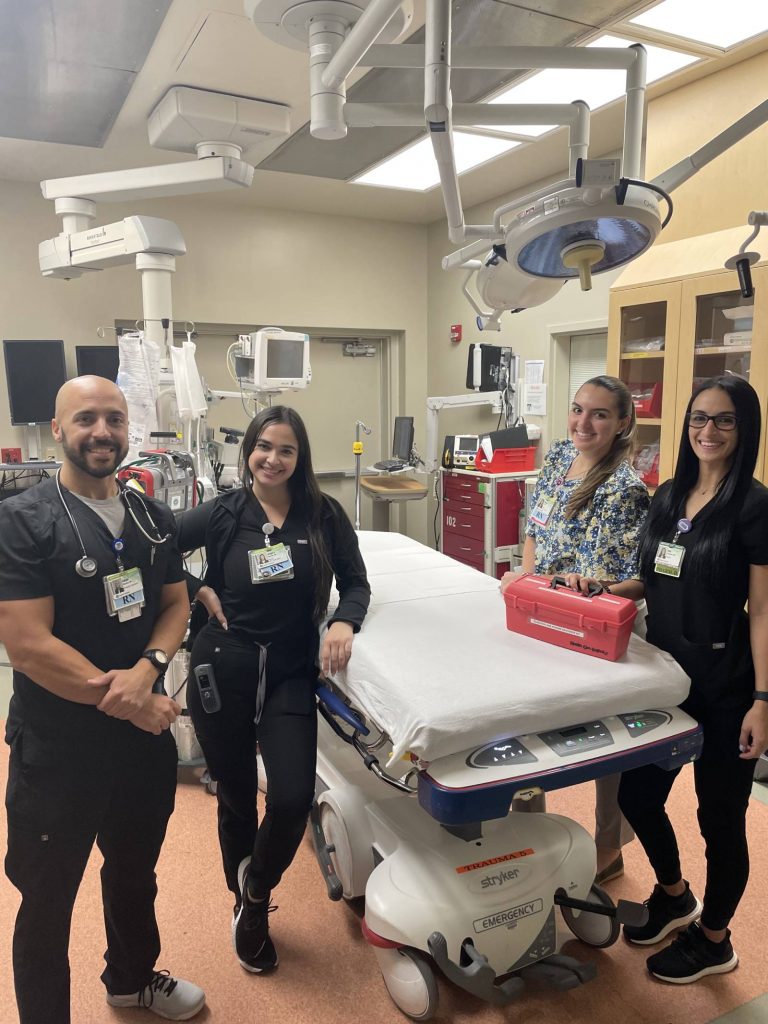 Dr. Wicks explains that Mr. Terry was fortunate he was transported to the hospital within a crucial time-frame that allowed the stroke team to administer a clot-busting solution used to treat ischemic strokes — the most common type.

“He was able to make it to the hospital relatively rapidly after the onset of symptoms — and he arrived within four hours and they were able to give him a clot-busting medication called Tenecteplase,” said Dr. Wicks. “That was very helpful in starting to break up the blood clot that was identified in his brain.”

Mr. Terry says his recall of being treated was fuzzy, but he remembers being at ease.

“I remember feeling totally comfortable,” he says. “I had no anxiety or fear at all. I don’t remember how many people were doing what … but I felt very comfortable and very assured that they were doing, you know, good things.”

The next step in Mr. Terry’s evaluation was to perform a CT angiogram, said Dr. Wicks. It revealed that he had a complete blockage of the right-middle cerebral artery. “That is the main artery that supplies the right side of the brain and that was likely the cause of his profound weakness on the left side,” Dr. Wicks said.

Explains Dr. Wicks: “In Mr. Terry’s case, we were able to advance catheters up into the carotid artery and then we were able to access the right middle cerebral artery where his blockage had occurred. We were able to suction and remove the majority of the clot. And then his ability to have that medication Tenecteplase also helped in opening up any smaller blockages, or smaller pieces of clot, that weren’t able to be removed.”

Dr. Wicks adds that the former Olympic rower has made “an outstanding” recovery. “He is now at home and receiving some physical therapy, but he is now returned to near full strength.”

Following the stroke, Mr. Terry would find out that he suffered from atrial fibrillation, more commonly known as AFib. It’s an irregular heartbeat during which the heart muscles fail to contract in a strong and rhythmic way. When a heart is in AFib, it may not be pumping enough oxygen-rich blood out to the body. The most serious risk factor for those with a AFib is a stroke.

“Anytime someone is diagnosed with atrial fibrillation, our biggest concern is the risk of stroke,” says Mario Pascual, M.D., Medical Director of Electrophysiology and Arrhythmia Managementwith Miami Cardiac & Vascular Institute. When the heart is in AFib, the blood can become “static and can be left pooling inside the heart,” says Dr. Pascual. That creates an ideal setting for a blood clot to form.

“When blood pools, a clot can form,” Dr. Pascual adds. “When a clot is pumped out of the heart, it can get lodged in the arteries, which may cause a stroke. Blocked arteries prevent the tissue on the other side from getting oxygen-rich blood, and without oxygen, the tissue dies.”

Mr. Terry said that he did not know he had AFib, despite his very active lifestyle and staying fit. “It was confirmed by the cardiologist later that I probably have had it for a while, but it’s because I’m in pretty good shape. My heart rate has been at a low level. My resting pulse for many, many years has been like 48 to 52 (beats per minute).”

In October, Mr. Terry is planning his 50th turn at the Charles Regatta, a rowing head race held annually on the Charles River, which separates Boston and Cambridge, Massachusetts. It is the largest two-day regatta in the world.

“The stroke was a surprise because I’ve been healthy,” said Mr. Terry. “I’ve been exercising a lot and playing golf, which is always walking the nine holes … and also outrigger paddling, which is an hour and a half to two hours, once a week. I was sleeping well and eating well. So, I was not expecting this at all.”