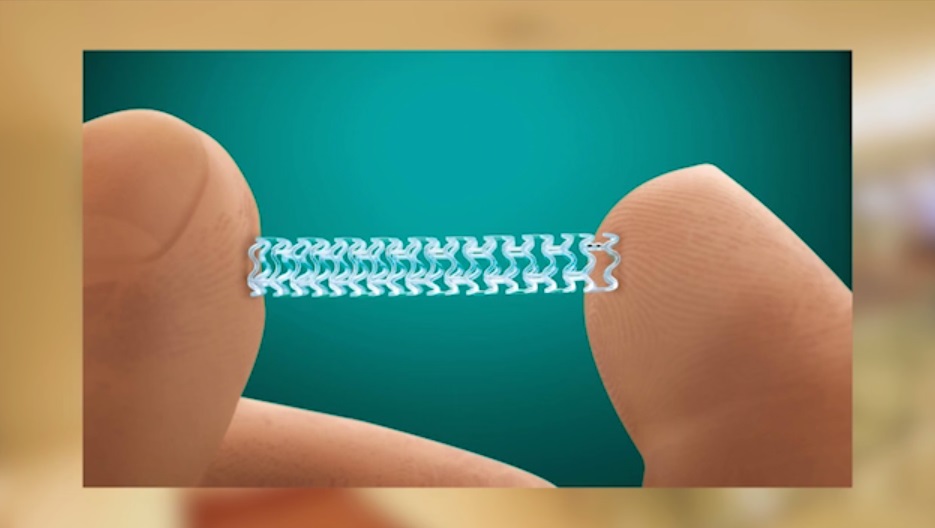 A new “absorbable” heart stent, the first on the market that dissolves over time,  is advancing the treatment of coronary artery disease to the next level, say doctors at the Institute who took part in groundbreaking trials leading up to the new stent’s approval by the U.S. Food and Drug Administration this past July. Ramon Quesada, M.D., Medical Director of the Structural Heart and Complex Percutaneous Coronary Intervention Programs at Miami Cardiac & Vascular Institute, recently implanted the device in a patient, marking the first such procedure in South Florida.

“This absorbable stent is a revolutionary advancement in the treatment of coronary artery disease,” explains Quesada, who was the principal investigator for the trials at the Institute. “It benefits the patient by treating the diseased artery then gradually dissolving, leaving a healed artery that can pulse naturally, the way it was meant to function.” (Watch Dr. Quesada’s video below)

The short name for the new stent is Absorb, and it’s a fitting moniker. The stent, or “scaffold” as cardiologists call them, is manufactured by Abbott Laboratories from a biodegradable polymer, similar to materials used in other types of absorbable medical devices such as sutures.

The potential advantages to such an absorbable stent include less scar tissue development in the treated arteries and fewer other complications. The older metallic devices remain permanently inside the body and can increase the risk of blood clots or cause complications as a patient ages.

Like other available stents, the Absorb releases a drug over time to treat the narrowed artery. Such “drug-eluting” stents were first approved more than a decade ago. But the non-metallic Absorb device takes the treatment of artery disease another step forward by completely dissolving within two to three years after it is deployed.

The Institute was the only South Florida medical facility to take part in the Absorb trials.

“We also had the opportunity to participate in cases outside of the United States in Europe,” Quesada said. “We got involved in more complex cases than the ones we were doing traditionally under the trials.  So the potential of this new technology, and this is the first generation, is really exponential. This is changing the whole spectrum of coronary intervention.”

Coronary heart disease is responsible for about 370,000 deaths each year in the U.S., according to the National Heart, Lung, and Blood Institute. The condition develops when cholesterol-containing deposits build up and narrow the coronary arteries, decreasing blood flow to the heart.

The FDA’s approval was based on the findings of a 2,008-person study of U.S. heart patients. The Absorb study found that 7.8 percent of patients treated with the new device suffered “a major cardiac adverse event,” a rate that was “clinically comparable” to the 6.1 percent rate for those treated with a drug-coated metal stent.

For now, some patients with coronary artery disease will not be candidates for the biodegradable plastic stent. Absorb shouldn’t be inserted in patients who are allergic to the materials used to make the device, those who are sensitive to the contrast agents administered before the stent is implanted or those who cannot take blood-thinning drugs for long periods, the FDA said.

Dr. Quesada refers to the development of the absorbable stent as the “fourth revolution” in treating coronary artery disease. The first involved opening arteries with balloons via angioplasty procedures. The second introduced metallic stents, or small mesh tubes, which can create problems by leaving scar formations. The third revolution, he explains, introduced the drug-releasing stents to help combat scarring.

“This new (fourth revolution) technology has a drug-eluting stent or a scaffold, but the difference is that it will be re-absorbed and disappear completely,” explains Dr. Quesada.  “Why is that important? It’s important because we restore the natural function of the artery. And we can revascularize the artery with this stent and, within three years, the artery will be free of any foreign body.”

The Baptist Health News Team talks to Dr. Quesada about the Absorb stent and its significance in treating coronary artery disease. Watch now.