Currently, there is no screening test to detect endometrial cancer early in women who are at average risk for the cancer and have no symptoms. The familiar Pap test is effective at detecting cervical cancer and, in rare cases, may reveal unusual cells associated with endometrial cancer, says Troy Gatcliffe, M.D., a gynecologic oncologist affiliated with West Kendall Baptist Hospital, Baptist Hospital, South Miami Hospital and Doctors Hospital.

Because there is no specific screening test, it’s important that women know the risk factors and symptoms of endometrial cancer and discuss this information and any changes in their bodies with their doctor.

Endometrial cancer occurs more frequently in Caucasian women over age 50. It is a hormone-driven cancer, say experts. After menopause, the ovaries stop making estrogen and progesterone, but a small amount of estrogen is still made naturally in fat tissue. This unopposed estrogen raises a woman’s risk for developing endometrial cancer, Dr. Gatcliffe explains.

Greater cumulative estrogen exposure also is a risk factor, which means women who have never given birth, never were pregnant, began menstruation at an early age or began menopause later in life have a higher chance of developing endometrial cancer.

“Having more fat tissue can increase a woman’s estrogen levels, which increases her endometrial cancer risk,” Dr. Gatcliffe added. “Women with a BMI greater than 30 are especially at risk. Maintaining a healthy weight through diet and exercise is the most important step women can take to lower their risk of endometrial cancer.”

According to the National Cancer Institute, obese and overweight women have two to four times the risk of developing endometrial cancer than women of a normal weight, regardless of menopausal status.

Abnormal vaginal bleeding is the most common symptom of endometrial cancer. Women may experience extremely long, heavy or frequent bleeding episodes or bleeding between periods or after menopause. Additional symptoms include:

•    Lower abdominal or pelvic pain.
•    Feeling a lump or a mass in the lower abdomen.
•    Difficulty or pain while urinating.
•    Pain during sexual intercourse.
•    Unexplained weight loss.

Although any of these symptoms can be caused by something other than cancer, it is important to have them evaluated, says Dr. Gatcliffe. “Post-menopausal women should not experience any bleeding – not even for a day,” he added. “If they do, they should consult their doctor. Early detection improves treatment outcomes.”

If you have symptoms of endometrial cancer, your doctor may take any of the following steps to diagnose or rule out the disease:

The four basic types of treatment for women with endometrial cancer are surgery, radiation therapy, hormonal therapy and chemotherapy. Your doctor will recommend one or more treatment options, taking into consideration the stage of the disease and other factors such as your age, overall state of health and fertility goals.

“Regardless of the treatment chosen, the key is early detection and that means paying attention to your body and reporting any unusual changes,” Dr. Gatcliffe says. 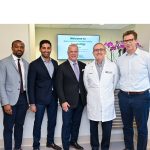