With Memorial Day around the corner, I thought I’d share with you some of my own grilling tips and a few of my “secret” marinades.

Preheat the grill properly.
If your grill isn’t hot enough when you start, your food will burn before it cooks through. As rule, allow about 10 minutes for a gas grill to heat up and about 30 minutes for a charcoal grill.

Don’t grill over flames.
Maintaining an even heat is important for grilling. Charcoal and wood fires should burn down to glowing embers before food ever touches the grate. Allow about 30 minutes (time to properly heat your grill) and wait until the coals have a red glow with an ashy look. Cooking over high flames will scorch food quickly, leaving you with charred and bitter results.

Clean the grate every time.
Clean the grill before and after each use. Avoid using brushes with steel bristles, which  can damage the enamel finish of some grates. Preheat the rack with all burners on high for 10 to 15 minutes to incinerate any remaining residue, which makes it easy to clean off. Make sure to oil both the grates and the food.

Don’t mishandle your burger patties.
Too much handling of burger meat can make your patty too compact and dense, leaving you with a tough finished product. Combine your ingredients and use only enough force to shape the patty. Don’t make you patties perfectly flat or in large balls. Make an  indentation in the center of each patty with your thumb before placing it on the grill, which will avoid the large swell in the middle of your patty as it heats up.

Don’t start basting with barbecue sauce immediately.
Barbecue sauce has several sugars in it and sugar burns very quickly. When grilling with BBQ sauces, always add them at the end of the cooking time (within the last 5 to 10 minutes), or use them when cooking over indirect heat. Don’t use leftover marinade to baste during the last few minutes of your grill time; there may not be enough time for the heat to kill any bacteria that may be present in that leftover marinade.

Don’t cut into your meats.
When you slice into meat to check for doneness, all the juices seep right out, leaving you with a dry, inedible product. Allow 5 to 10 minutes for meat to rest before cutting into it. If you need to test for doneness, do so with a meat thermometer instead of a knife. Place the thermometer in the thickest part of the meat, and for an accurate reading, make sure you’re not touching bone or grate. Always err on the side of undercooking; you can easily put something back on the grill for a few minutes, but once it’s overcooked, I haven’t found a way to fix it yet.

I could give you very complicated marinades and sauces, but often the most simple things come out far better, so I’ll share with you two things that absolutely anybody can do.

One of my favorites is Montreal steak seasoning, mixed with some extra virgin olive oil and low-sodium or gluten-free soy sauce. Take 2 teaspoons of the steak seasoning, 2 teaspoons of soy sauce and 2 tablespoons of extra virgin olive oil. Marinade your meats for 20-30 minutes (enough time to heat your grill properly), and that’s it, really. In addition to it being easy and tasty, you won’t be able to beat the nutritionals on this marinade: Calories: 5, Fat: 0 g, Cholesterol: 0 mg, Sodium: 560 mg, and Carbohydrates: less than 1 g.

My other go-to seasonings are sea salt and fresh ground pepper, and just a touch of olive oil. Sometimes just properly seasoning an item can make all the difference in the world. You can even finish cooking your meat and sprinkle it with a little sea salt as it rests.

Have a great Memorial Day BBQ!

He served as Chef at Town Kitchen & Bar, Jake’s, the Hyatt Regency Coral Gables, the Shore Club, Por Fin, and the Conrad Hotel. He also was also part of several teams that received the Mobile 4 and 5 star awards, as well as Cioppino being named to America’s Top 50 restaurants by Esquire Magazine 2005, during his time at the Ritz-Carlton Key Biscayne. Chef Richard Plasencia graduated from Johnson & Wales University with a Bachelor of Science in culinary arts. 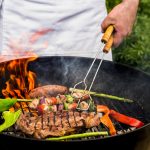 Food Grilling Safety for 4th of July and Beyond