Breakthroughs in treatments and a surge in early screenings have resulted in more Americans than ever surviving cancer, says the U.S. Centers for Disease Control and Prevention (CDC) in a new report.

Among the most commonly diagnosed cancers, the five-year relative survival was 97 percent for prostate cancer, 88 percent for breast cancer, 63 percent for colorectal cancer and 18 percent for lung cancer.

“These data are an important reminder that a key to surviving with cancer is making sure everyone has access to care from early diagnosis to treatment,” said Lisa Richardson, M.D., director of CDC’s Division of Cancer Prevention and Control.  “We know, for example, that early detection of colorectal cancer has had the largest impact on long-term survival rates.”

The CDC report confirms what the medical community has known for years — educating the public about screenings and early intervention, combined with medical treatment advances — are increasing survival rates across the country. But the CDC was also looking to find geographic trends that would allow researchers to pinpoint the locations were more screenings and expanded care are needed the most.

“For the first time we have data on cancer survival for extended population coverage,” says Rebecca Siegel, director of surveillance information in the Surveillance and Health Services Research Program for the American Cancer Society.

Can smog and other forms of air pollution hurt your health? Scientific evidence points to a strong link between air pollution and higher stroke risk, according to a study recently published in the BMJ, (formerly known as the British Medical Journal).

“Outdoor air pollution is an important risk factor for cardiovascular disease throughout the world, with particulate air pollution alone responsible for over three million deaths each year,” the BMJ reported.

As part of the research project, the authors analyzed 103 studies, representing  6.2 million cases of hospitalizations and deaths linked to stroke in nearly 30 countries. The findings: even short-term exposure (one day to one week) can increase an individual’s risk of stroke, according to researchers.

Hospitalizations related to stroke were more likely to occur when the patient had been exposed to carbon monoxide, sulfur dioxide and nitrogen dioxide, the report said.

“Gaseous and particulate air pollutants have a marked and close temporal association with admissions to hospital for stroke or mortality from stroke. Public and environmental health policies to reduce air pollution could reduce the burden of stroke,” the researchers said.

Read the following articles to learn more about strokes : 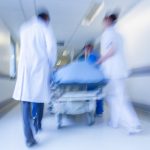