If you carried a genetic mutation that increased your risk of developing breast cancer, would you want to know? Increasing numbers of people are answering “yes” — despite the emotional and ethical dilemmas genetic testing can potentially generate.

Experts say that while the rising numbers could in turn help raise survival rates, it is an option with potentially life-altering ramifications ‒ one that should not be undertaken without appropriate medical care and education. Without specialized care and support, patients often don’t know whether they really need testing, or what to do with the results once they have them.

“What makes cancer genetics and medical genetics different than any other testing a physician might order is that it affects people besides yourself,” said Jeff Boyd, Ph.D., director of translational research and genomic medicine at Miami Cancer Institute. “This impacts well people other than yourself so the ethical, legal and social implications are enormous. That’s why we have genetic counselors.”

However, he said, many patients are choosing to have the testing not only to make better treatment decisions for themselves, but to potentially save the lives of family members. Studies have shown an uptick in genetic testing for breast cancer genes (BRCA 1 and 2 and PALB2) in younger women, including the most recent research published in February in the journal Oncology, a publication of the Journal of the American Medical Association.

Researchers found that younger women with breast cancer are increasingly choosing testing to determine if they are carriers of genetic mutations (BRCA 1 and 2) that place them at increased risk of developing breast and ovarian cancer. Results of the study showed that 87 percent of the nearly 900 women included, opted for testing by one year after a breast cancer diagnosis.

“The good news is that more women are becoming aware of the concept of genetic susceptibility to breast and other cancers, and some of the red flags for genetic predisposition certainly include early age of diagnosis,” Dr. Boyd said.

Boyd added that the increase in testing is the result of “an increased awareness and the other is the reality that probably a number of tests are being ordered inappropriately.”

Last year, a study also published in Oncology found just that. Less than half the women who received genetic testing for a breast cancer gene received appropriate counseling and education before being tested.  The study, led by the University of South Florida with support from the Aetna Foundation, the American Cancer Society and Facing Our Risk of Cancer (FORCE), found that just 36.8 percent of patients received genetic counseling from a genetic counselor or clinician prior to testing. In most cases, the doctor who ordered the test never suggested counseling. The study also found that women who did not receive genetic counseling were two to three times more likely not to meet testing guidelines. They also were far less likely to understand the purpose of the test, the role of BRCA 1 and 2 in cancer genetics and how it affected their health and choices.

“Tests, regardless of the circumstances, should never be ordered without the patient being interviewed and assessed by a qualified health professional in the context of cancer genetics,” Dr. Boyd said, “so the tests aren’t being ordered simply because a young person comes in and says they want to be tested.”

While the demand for testing is increasing, the number of genetic counselors has not kept pace, Dr. Boyd said.

“I think it’s important for people to know that the demand exceeds the supply of certified genetic counselors. We’re trying to improve that at the Miami Cancer Institute, but unfortunately that doesn’t help communities that don’t have access to Centers of Excellence like we’re building here.”

Amanda Hodgkins recently joined the Institute, bringing with her, not only a specialized education, but a personal commitment to the field and to patients.

Patients need education, she said, but they also need a specialist to talk to about their fears and concerns. Sometimes the patient’s family members do not want to be tested or disagree with the patient’s decision to undergo testing. If the results are positive, what then? Following the example of actress Angelina Jolie, patients may be considering removing their breasts or ovaries to prevent cancer or a recurrence. Education from both their doctor and genetic counselor helps patients understand their choices and make informed decisions.

Hodgkins said the most common questions she receives are about insurance coverage.

“The good news is that health insurance has come a long way in terms of covering the testing and in the fact there are actually laws against discrimination for people who have positive genetic test results,” Hodgkins said.

While one in eight women will be diagnosed with breast cancer in their lifetime, so far scientists have found evidence that only 5 to 10 percent of people have inherited increased risk of the disease. Many people have a strong family history of breast cancer, but test negative for the gene. Scientists are still trying to find a genetic reason.

Over a period of 20 years, since the discovery of BRCA 1 and 2 in 1994 and 1995, respectively, many more gene mutations have been identified and associated with particular cancer types from breast to  colon cancer, Dr. Boyd said.  In 2006, researchers discovered the PALB2 mutation, which also increases the risk of developing breast and other cancers.

“Pretty much anybody who gets a genetic predisposition test now gets a panel. Nobody gets a single test anymore unless we already know what the mutation is, and we’re testing additional family members,” he said. “We know there’s a mutation in BRC2 for example, so the family members would only get a BRC2 test not the whole panel.”

Breast cancer “hereditary susceptibility” testing is generally a panel of more than two dozen genetic mutations using a saliva or blood test. It is estimated that only between one in 400 and one in 800 people are carriers of the BRCA 1 and 2 mutations.  Among Ashkenazi Jewish women and men, the number is one in 40. However, this does not mean that women of other racial backgrounds should ignore the test and its potential benefits. A study published last year in the journal Cancer found that black women had higher incidences of mutations in BRCA 1 and 2 than previously believed. Scientists now recommend BRCA testing for African American women age 40 and under with invasive breast cancer.

“We always hope the testing is negative, but when we do find a broken gene, the most rewarding part for me is when we test their relatives,” Hodgkins said. “So because of testing this one patient, we’ve essentially been able to catch cancer earlier or prevent a cancer diagnosis in their relatives by what we call cascade testing, or testing other family members. We’re able to give people the tools to really put them at the best chance to catch cancer early or lower their risks.” 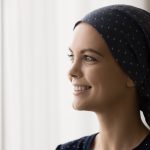 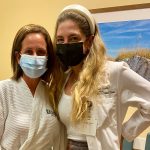 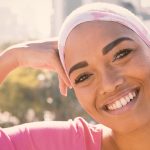