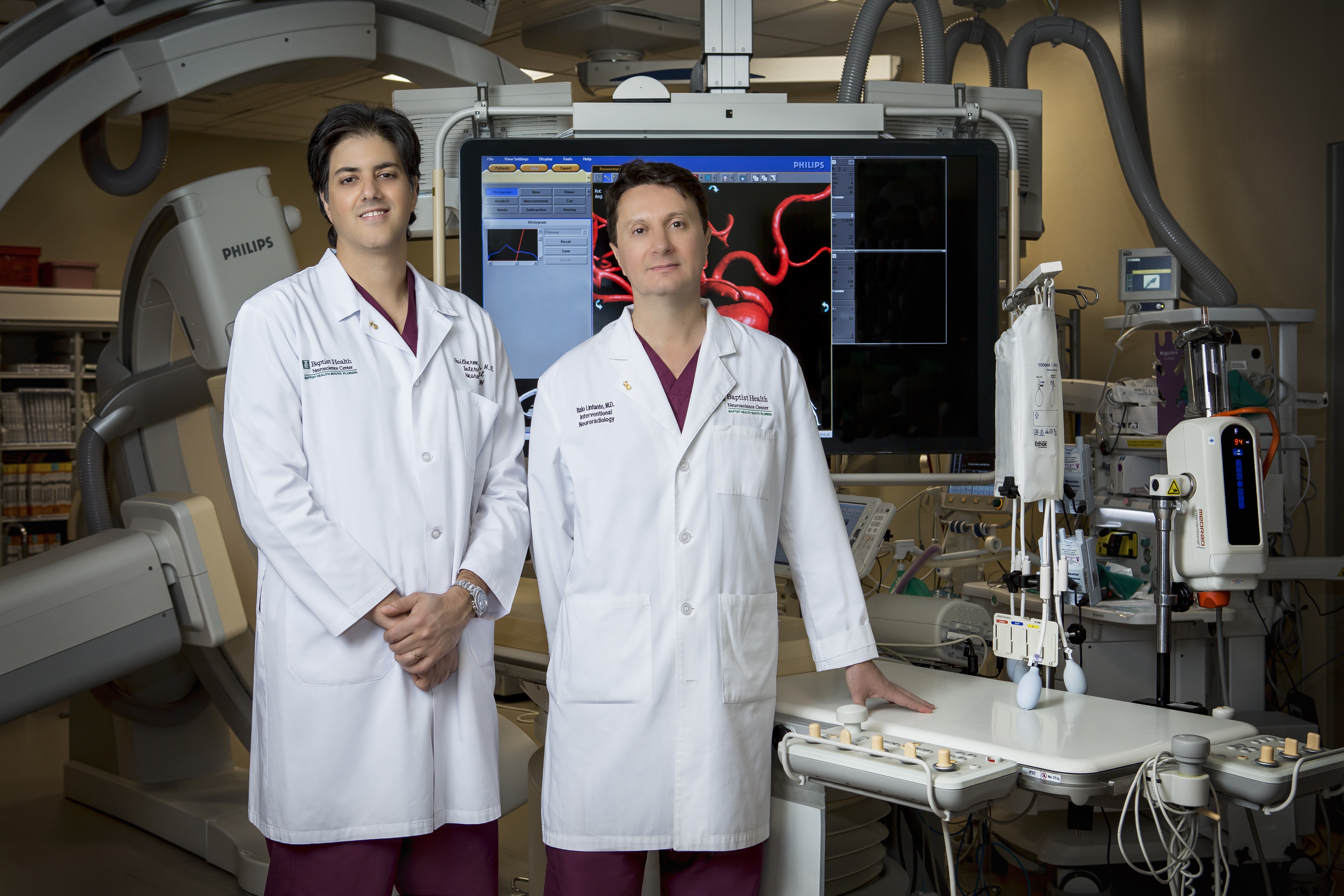 Brain aneurysms — bulges in the walls of blood vessels — are like ticking time bombs in your head. While not all aneurysms require a repair, all need to be monitored.

When brain aneurysms do need repair, experts at Baptist Hospital, home of Miami Cardiac & Vascular Institute and Baptist Health Neuroscience Center, work together to fix them in a minimally invasive manner, without cutting open the skull. Instead, interventional neuroradiologists use the body’s blood vessels as a highway to the brain, threading tiny devices through a catheter to plug the aneurysm and strengthen the wall of the blood vessel.

“We are finding new ways to treat unruptured aneurysms,” said Italo Linfante, M.D., medical director of interventional neuroradiology at Miami Cardiac & Vascular Institute and the Neuroscience Center. “We have many new tools in our toolbox, and the technology is expanding more and more.”

“New devices are coming along almost every year,” added Guilherme Dabus, M.D., director of the Interventional Neuroradiology Fellowship Program at the Institute and the Neuroscience Center. “They don’t replace one another but are aimed at addressing a specific challenge that one type of aneurysm has over another.” (Drs. Dabus and Linfante are pictured above)

Sometimes, due to the aneurysm’s size or the patient’s symptoms, there is no time to plan out or think through the procedure. It’s a life-and-death emergency. In the worst scenario, the aneurysm has already ruptured, putting the patient at great risk of death or permanent disability.

Here are the stories of two people with devastating brain aneurysms. Against the odds, they made full recoveries after minimally invasive procedures at Miami Cardiac & Vascular Institute saved their life.

Gladys Pastrana:  ‘I Felt a Sense of Impending Doom’ 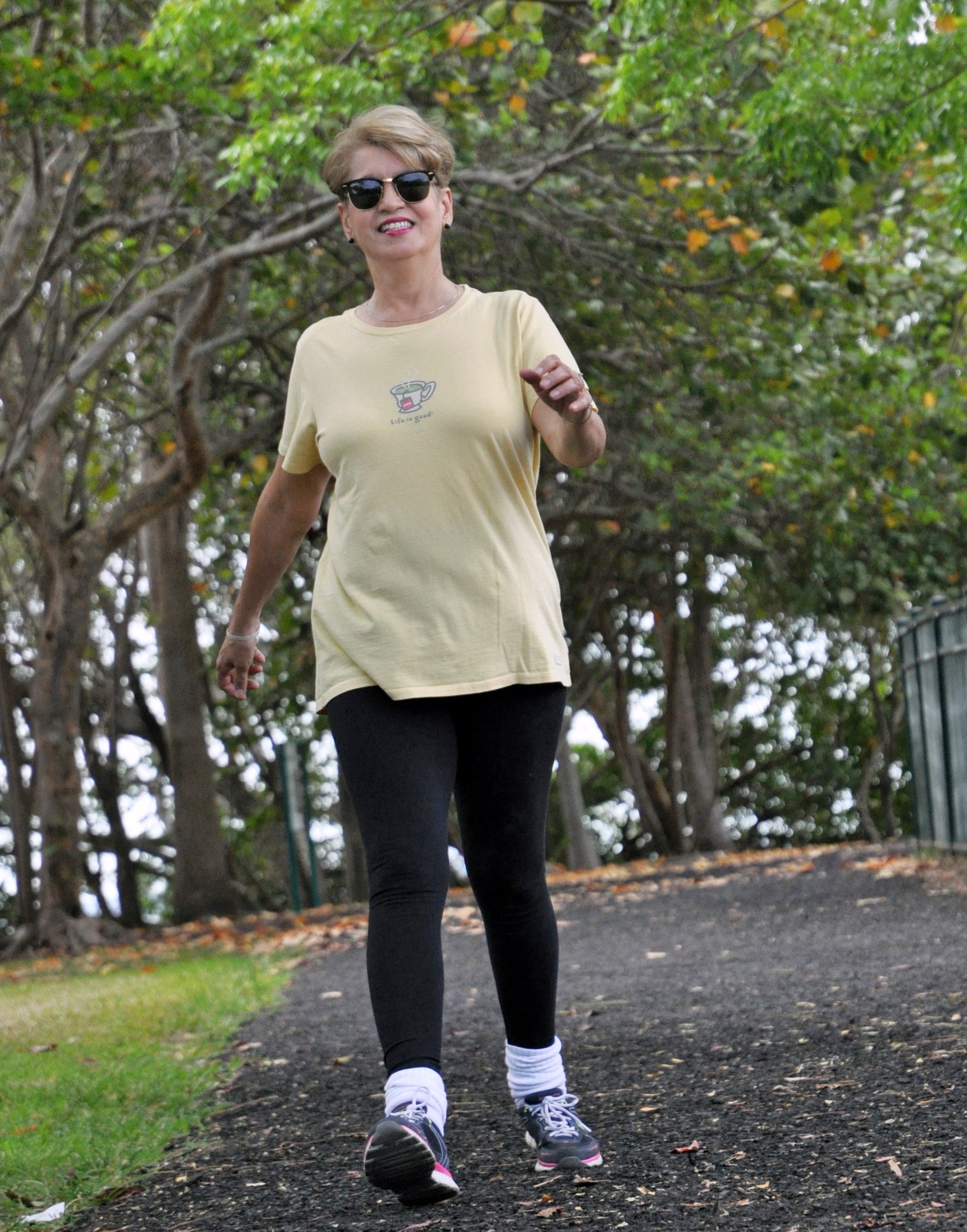 One day at work, Gladys Pastrana had a headache, “but nothing significant.” She pushed ahead with her administrative-support duties at a reinsurance company on Brickell Avenue.

A little later, while washing her hands in the restroom, the headache suddenly turned “severe, horrific.” She staggered and lunged toward a chair. “I remember thinking, ‘Oh my God, I’m going to die in here, all alone.’ I felt a sense of impending doom.”

Somehow, she made it back to her desk, but her boss, the only other person in the office, had stepped out. She managed to call her husband, a real estate agent, to come pick her up. When he arrived, she told him to take her straight to Doctors Hospital. “I felt like I was going to explode,” she remembered.

At the ER, her blood pressure was an alarming 216 over 120, and she was rushed to the CT scanner. “I overheard, ‘Oh, she’s got bleeding in the brain.’ Everything happened very fast after that.”

With a ruptured brain aneurysm, her life was on the line. In fact, about 40 percent of people with such a rupture will not survive, and two-thirds of those who do survive will suffer permanent damage, according to the Brain Aneurysm Foundation.

Ms. Pastrana, 55 at the time, was transferred to Baptist Hospital, where Dr. Dabus, orchestrated her immediate care. A CT brain angiogram gave doctors a clear picture of the blood vessels involved, pinpointing the bleeding aneurysm. The angiogram also spotted a second, unruptured aneurysm in her brain.

Dr. Dabus reached the ruptured aneurysm by snaking a catheter from a blood vessel in her groin to her brain. Then he plugged the bleeding bulge with tiny platinum coils, creating a dam in the wall of her blood vessel. After Ms. Pastrana recovered for a few days, Dr. Dabus did a second procedure, using a stent-like device, known as a flow diverter, to bypass Ms. Pastrana’s unruptured aneurysm.

Ms. Pastrana was impressed with Dr. Dabus’s calm manner and ability to communicate what was happening, even as her life was hanging in the balance. “He explained everything in plain and simple terms. He didn’t use any medical jargon and I really appreciated that,” she said.

Ms. Pastrana said she received “excellent” care from nurses and others during her 15-day stay at Baptist Hospital. “They made me feel valued,” she said, “and I think that really helped my progress and recuperation.”

Amazingly, Ms. Pastrana did not need rehabilitation therapy. It’s not known why some people develop aneurysms, although heredity, high blood pressure and cardiovascular disease are thought to be risk factors.

Follow-up scans continue to confirm the success of Ms. Pastrana’s aneurysm repairs. Now 59, Ms. Pastrana used her near-fatal experience to transform her life. “I lost weight. I got my blood pressure under control. I eat whole foods. I get exercise every day power-walking.”

She also attributes her recovery and sense of well-being to her upbeat attitude. “I have a positive disposition and faith,” Ms. Pastrana said. “Those things play a huge role, as well.”

Krystal Rountree: ‘I Never Once Thought I was Going to Die’

Krystal Rountree was an articulate, bold and fun-loving 16-year-old when the ominous symptoms started. The Boca Raton teen, who had worn glasses since she was a young girl, started complaining of occasional double vision. Her mother took her to the eye doctor.

Her optometrist was alarmed at something he saw in the back of her eye and referred Krystal to a neurological ophthalmologist. But before she had a chance to see the specialist, she ended up in the ER — twice — after having an apparent seizure. The second time, doctors ordered a CT scan, which revealed an unbelievably large aneurysm in her brain; in fact, it was so large it was first thought to be a tumor. The staff was stunned; they had never seen anything like it. The grim prognosis brought an ER nurse to tears.

The neurologist on call said the hospital in Palm Beach County was not equipped to handle the case. In fact, only a handful of specialists in the world had the expertise and experience to attempt to save Krystal’s life, her family was told.

Fortunately for Krystal, one of those specialists was nearby. Dr. Linfante has seen about a dozen “giant” aneurysms in nearly a decade at Baptist Hospital, where interventional suites are equipped with the most sophisticated technology available to repair brain aneurysms.

Still, the risks of a procedure were daunting. Giant aneurysms, which are at least 25 mm (about an inch), account for only about 1.5 percent of the brain aneurysm cases at Baptist Hospital. Doing nothing, Dr. Linfante said, was a clear “sentence of death.” Her only slim hope was intervention.

Undaunted, Krystal named her aneurysm Eugene. She amazed her caretakers with a positive attitude as those around her anxiously considered the sober reality of her situation. Even Dr. Linfante knew it would take a virtual miracle for his young patient to make a full recovery.

“People around me said I’m probably not going to make it, but I knew I was going to live,” recalled Ms. Rountree, now 20. “I never once thought I was going to die. I knew Dr. Linfante was the best possible person to be doing the procedure.”

With a team in place to do open surgery in case Dr. Linfante’s minimally invasive approach was unsuccessful, the doctors took Krystal to the interventional suite.

After snaking a catheter into her brain, Dr. Linfante was stopped in his tracks. No device or technology existed yet to bridge an aneurysm that large. He had to improvise, piecing together four “flow diverters,” a then-experimental device used to redirect blood flow away from much smaller aneurysms. The implant, described as a “smart stent,” ultimately reconstructs the artery, drying up the aneurysm. Somehow, after multiple attempts and many hours, Dr. Linfante succeeded in bypassing the aneurysm, forming a bridge to connect two healthy pieces of the artery.

When she woke up from the lengthy procedure, she said to Dr. Linfante: “Thank you for saving my life.” It was the beginning of a special friendship that has endured in the four years since Krystal’s crisis. They keep up with each other on social media and via cell phone.

Ms. Rountree plans to study botany at Florida Atlantic University and is interested in solar energy and sustainability issues.

At her two-year follow-up visit with Dr. Linfante, a CT angiogram showed a perfectly remodeled blood vessel where the giant aneurysm had been. “It looked beautiful,” Dr. Linfante said. The rewarding feeling is hard for the doctor to describe.

“This was definitely one of the toughest cases I’ve ever done,” he said. “Here was a young girl, sentenced to death or disability, and she’s leading a normal life now.”