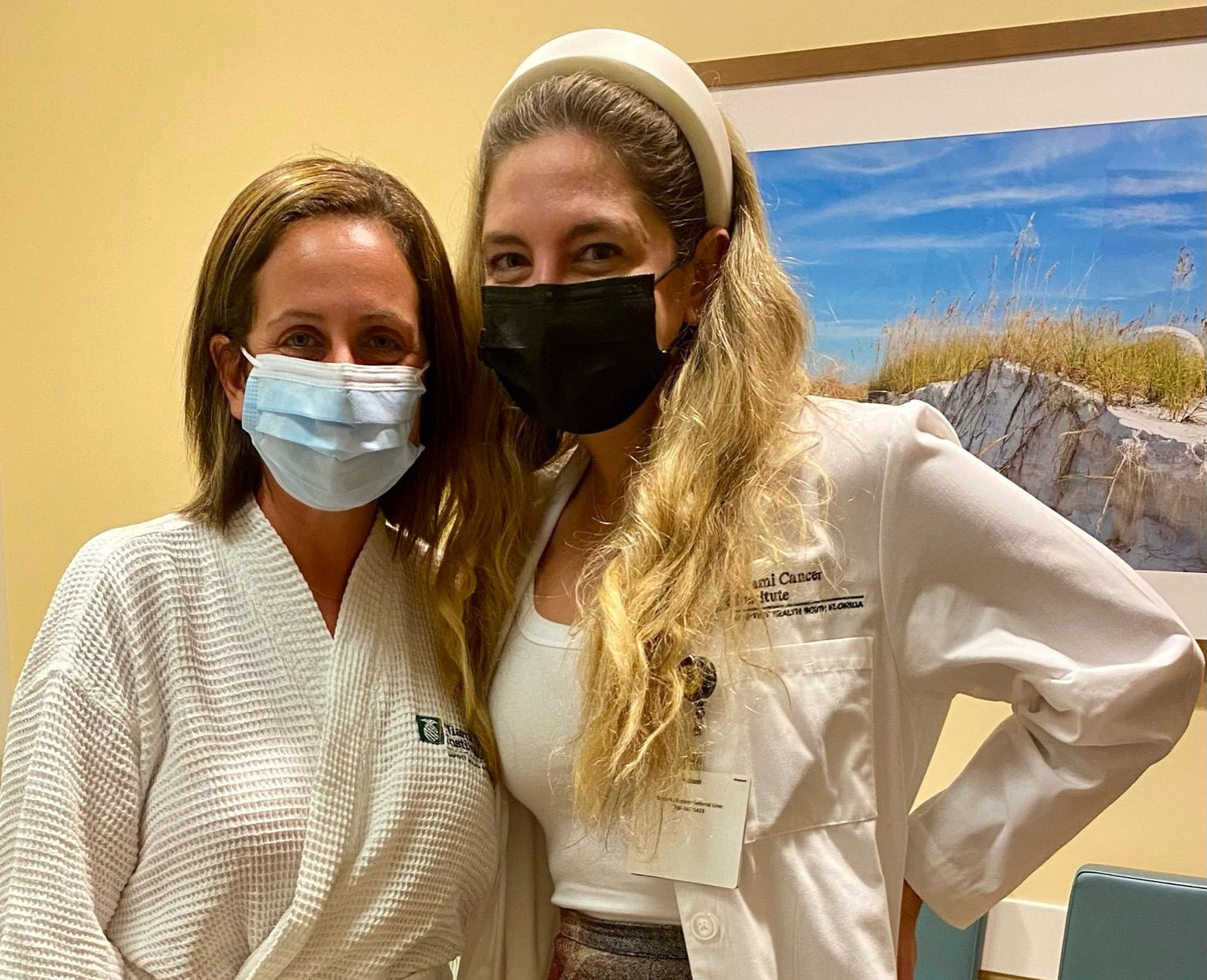 Running in the 26.2-mile Life Time Miami Marathon & Half was a goal Tracey Hecht set for herself while battling breast cancer ― a journey that included multiple surgeries, chemotherapy and radiation. Crossing the finish line, she knew, would be symbolic of her greater victory. What she never envisioned, however, was that running next to her would be Starr Mautner, M.D., her breast surgeon at Miami Cancer Institute.

“I get chills just thinking about being able to start with Dr. Mautner,” Ms. Hecht said. “Starting the race with someone who literally saved my life, this is a very special event.” On Feb. 6, among the thousands of people who are scheduled to run the course that snakes through the city, the two will line up together ― Ms. Hecht to run the full marathon while Dr. Mautner tackles her first-ever half-marathon.

The women, who each have two young children, share a passion for an active and healthy lifestyle. Their plan to run together grew from the mutual admiration they developed during Ms. Hecht’s treatment.

Ms. Hecht, 37, is a certified running coach, personal trainer and bootcamp instructor. As Dr. Mautner increased her own training schedule in preparation for the big event, Ms. Hecht was always there with an encouraging word. Her message to Dr. Mautner before the race: “I’ll see you at the finish line.”

The two met in November of 2020. Ms. Hecht had already been diagnosed with an aggressive triple-negative left-sided breast cancer that had spread to the lymph nodes under her arm. She was finishing chemotherapy at another hospital when doctors there told her they would not do reconstructive surgery at the same time as her planned double mastectomy. She sought Dr. Mautner for a second opinion and found in her someone who cared deeply about her patients’ concerns.

“To her, this was devastating. She is a young woman, and typically we like to offer reconstruction at the same time when possible,” Dr. Mautner said. “I saw no cancer involvement of the overlying skin and I had her meet with a plastic surgeon here.”

“I felt that they were there to support me. I was not just a number,” Ms. Hecht said. On Nov. 18, 2020, Ms. Hecht had a double mastectomy and lymph node dissection along with the first part of reconstruction, which involved placing expanders under the skin. To reduce the risk of recurrence, in February 2021, Ms. Hecht began radiation therapy with radiation oncologist Ana Botero, M.D., along with oral chemotherapy.

It’s in the genes

Ms. Hecht was not shocked by her cancer diagnosis. Some 10 years earlier, genetic testing revealed that she had a BRCA 1 gene mutation, known to significantly increase a woman’s risk for breast and ovarian cancer. She followed screening recommendations, having either a mammogram, ultrasound or MRI every six months, delaying screening only during her two pregnancies.

It was while she was breastfeeding her second child that she noticed some pain and blood in her breast milk. She’d also experienced a low-grade fever. Her mother, a retired obstetrician and gynecologist, had opted for a prophylactic bi-lateral mastectomy years earlier after discovering she had the BRCA 1 mutation. She insisted her daughter get to the doctor immediately.

“It wasn’t a shock, actually,” Ms. Hecht says of her diagnosis. “I was planning on having a preventative double mastectomy after having kids and finishing breastfeeding.” She also understood she faced additional decisions. With her positive BRCA test and a family history of gynecologic cancers, she was considering a hysterectomy.

All under one roof

On Aug. 11, 2021, Ms. Hecht was headed to the operating room again. John Paul Diaz, M.D., chief of Gynecologic Oncology at Miami Cancer Institute, performed a hysterectomy as a preventive measure. He was joined by Christopher Gomez, M.D., a urologic surgeon at the Institute, who repaired the prolapse of some tissues weakened during childbirth. And Dr. Salinas completed the breast reconstruction.

“We know that when risk-reducing surgery is performed in pre-menopausal women who test positive for BRCA mutations, there is up to a 95 percent reduction in ovarian cancer risk,” Dr. Diaz said. “But the decision to have a prophylactic oophorectomy, or removal of the ovaries, should be an individual one made after discussion between the patient and her doctors.”

Ms. Hecht appreciated that Miami Cancer Institute physicians worked so closely together and coordinated the procedures. “Being able to have several treatments under one roof was incredibly helpful,” she said.

Back in the game

When she got the all-clear from her doctors, Ms. Hecht eased back into running. In November 2021, she began teaching bootcamp again. “When I’m running, my brain shuts off. I get a runner’s high,” she said. “Getting back to that point was where I really felt like myself.”

Now free of any signs of cancer, Ms. Hecht is combining what she has learned as a patient with her personal training enterprise. She is working with other young mothers and women who are recovering from cancer treatment, modifying exercises and training schedules to keep them safe while they heal.

Getting a diagnosis of breast cancer when you have a known genetic mutation can be devastating, Ms. Hecht said. “But I’m here to say it’s not a death sentence. I’m living proof that it’s not.”

Before the race, Dr. Mautner had a message for her patient and friend. “You’ve done harder things. I can’t wait to celebrate all of our victories at the finish line.”