When the U.S. Centers for Disease Control and Prevention (CDC) released their latest update on cancer survival rates earlier this year, prostate cancer was mentioned as having the highest five-year survival rate at 97 percent.

And it doesn’t stop there. The relative 10-year survival rate for prostate cancer is nearly as high, and the 15-year relative survival rate is about 94 percent.

There has been much progress in the treatment of the disease over the last 15 years, with various medications approved by the U.S. Food and Drug Administration to treat the disease at various stages of progression. Moreover, there is a much broader understanding among men at middle age that it’s important to get screened for prostate cancer by their primary doctors — despite the stigma attached to the digital-rectal prostate examination as part of a general screening.

A greater understanding of the biology and the genetics of prostate cancer has also helped develop effective treatments.

Recently, researchers with Cancer Research UK announced that they had found five different types of prostate cancer after analyzing 259 men with the disease. The researchers analyzed the samples and looked for genetic differences to develop targeted treatments specific to each man’s prostate cancer.

The researchers concluded that five different types of prostate cancer were found based on 100 genes. These genes demonstrated the risk of the disease progression, which proved more accurate than the currently used Gleason score test and the controversial PSA (Prostate Specific Antigen) (PSA) blood test.

Prior research had found six of the genes were linked to prostate cancer. But in the new published study the other 94 genes are associated with prostate cancer for the first time.

“Ultimately, this could mean more effective treatment for the men who need it, helping to save more lives and improve the quality of life for many thousands of men with prostate cancer,” said Malcolm Mason, a prostate cancer expert at Cancer Research UK, in a statement.

Early screenings that include physical exams for prostate cancer are a must for men in their 50s — and even earlier if they fall into higher-risk categories, such as African-American males and those with a family history of the disease.

The American Cancer Society recommends men at high risk — African-American men and men who have a father, brother or son diagnosed with prostate cancer before age 65 — to consult with their doctors about screenings at about age 45 or earlier. Men facing an even higher risk — those with multiple family members affected by the disease before age 65 — should start even earlier, at age 40.

“If you fall into a higher-risk group, you certainly should tell your doctor about your family history to start screenings earlier than men who are not at risk,” said Rosendo Collazo, D.O., a Baptist Health Medical Group physician with Baptist Health Primary Care.

Men over the age of 50 not in the high-risk category should undergo a digital-rectal prostate examination as part of a general annual screening. It is still considered the most reliable initial test. The physician will feel the prostate for hard, lumpy or abnormal areas.

The government-backed U.S. Preventive Services Task Force does not recommend the PSA screening for prostate cancer. Additionally, the American College of Physicians (ACP) does not recommend it for men younger than age 50 and older than age 69. The PSA test actually detects the protein that acts as a biomarker for prostate cancer, but it also detects other things that can lead to higher numbers, effectively creating false alarms that can lead to unnecessary treatments.

“As with everything else, men should be informed about the effectiveness of the physical exam and the questions about the PSA,” said Dr. Collazo. “Be informed as opposed to just saying ‘ok’.”

According to the CDC, these risk factors increase the chances of getting prostate cancer:

Age: The older a man is, the greater his risk for getting prostate cancer.

Family history: Certain genes that you inherited from your parents may affect your prostate cancer risk. Currently, no single gene is sure to raise or lower your risk of getting prostate cancer. However, a man with a father, brother, or son who has had prostate cancer is two to three times more likely to develop the disease himself.

Race: Prostate cancer is more common in some racial and ethnic groups than in others, but medical experts do not know why. 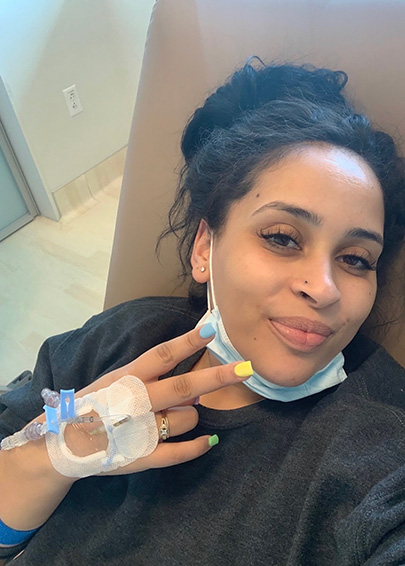 Young Mother Stares Down Cancer, Gets Back to the Job She Loves