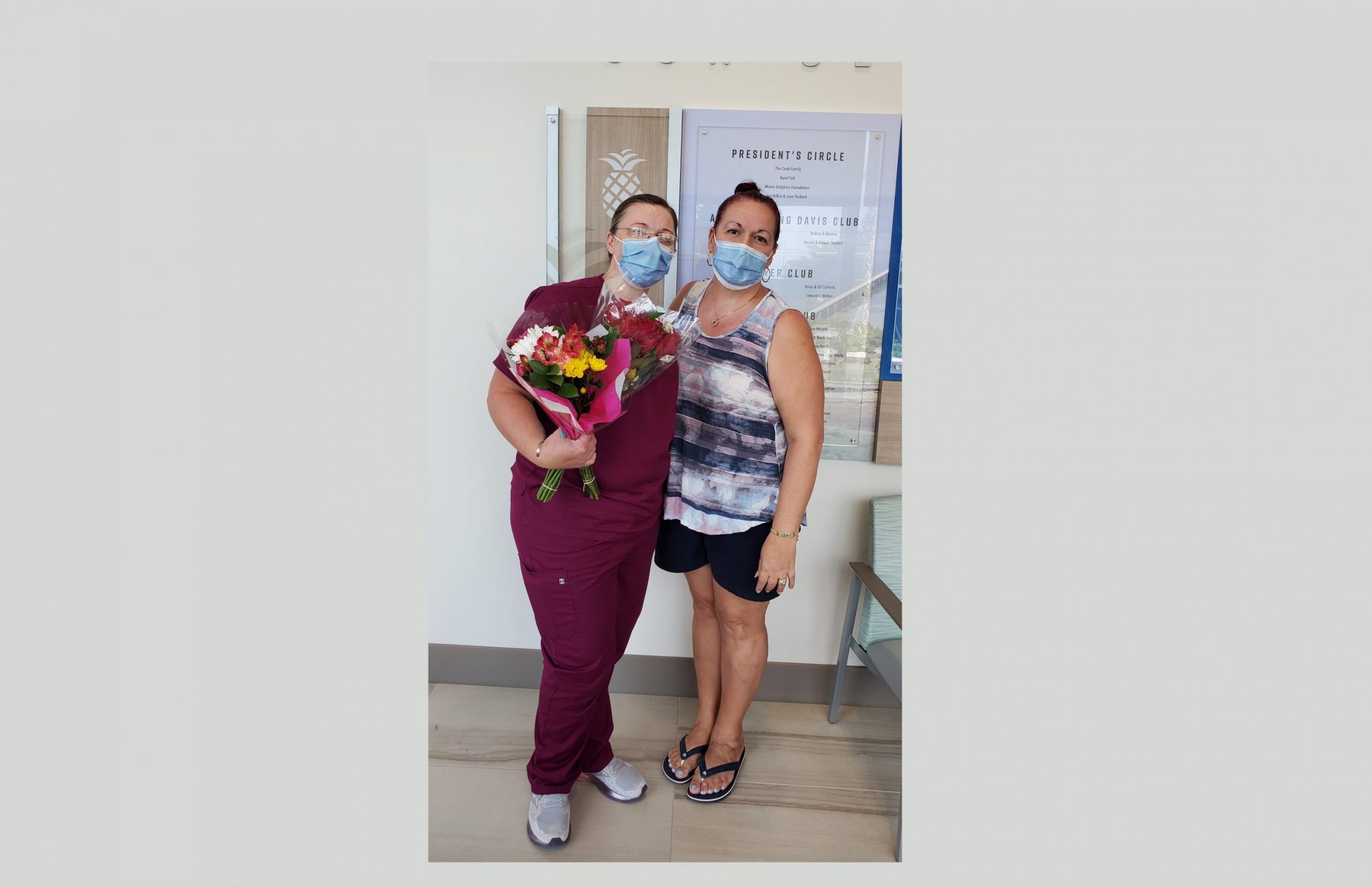 Candy Hernandez knew she was a little behind on getting her mammogram. Like many women, she allowed family obligations to come first, and then the pandemic happened. Somehow, far more time slipped by than she realized.

When she finally went to Baptist Hospital for the important screening test at the end of June, she was surprised to learn that five years had passed since her previous test. She was even more surprised to get the results and  hear that this more recent mammogram showed something “suspicious” in her right breast.

“Your mind goes to a thousand different places. God only knows what they are seeing,” says Ms. Hernandez (pictured above, at right). The thought that she had allowed so much time to elapse plagued her. “I guess I forgot about myself.”

A retired administrative assistant who splits her time between Miami and the Keys, Ms. Hernandez was happy to discover she could get a follow-up appointment very quickly at Fishermen’s Community Hospital in Marathon. The hospital officially openened its brand new facility on July 1 to replace the building damaged by Hurricane Irma. There, Ms. Hernandez had a diagnostic mammogram and breast ultrasound.

Ms. Hernandez was impressed not only by the bright new facility, but by the hospital’s compassionate mammogram team, who understood her anxiety. “They take the time to treat you as an individual. It’s like they are here just for you — that’s how they made me feel,” Ms. Hernandez said.  “They were my angels — you could tell they really cared.”

Ms. Hernandez was relieved to learn the problem was benign, but she does not take her diagnosis for granted. “It opened up my eyes,” she said.

All over the country, physicians are worried that women who put off their mammograms because of COVID-19 or for any other reasons might not have such a happy result.

Mammograms don’t prevent breast cancer, but they can save your life by detecting cancer early, before a lump can be felt. Delaying your screening gives time for a cancer that might be detected at an early stage to grow into a more advanced problem that will require more radical treatmentand have a poorer outcome, physicians warn.

Ms. Hernandez, 57, looks at the screenings in a whole new light. She has another follow-up appointment in six months, and she won’t let anything keep her away. Her message to other women: If getting your annual mammogram has fallen off your list of things to do, you need to find time in your schedule.

“Women, in general, tend to put themselves last because of family. We take care of everyone else and put their needs first,” she said. But that doesn’t work when it comes to your health, she warned.