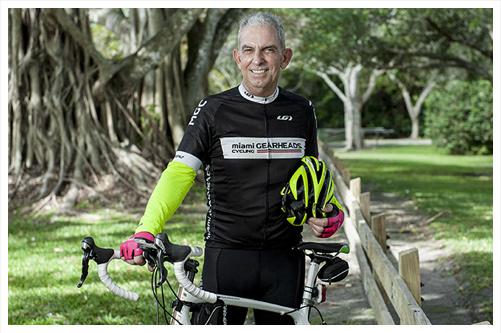 When Peter Basso got back on his bike after his cancer treatment, it represented more than just a chance to exercise. To him, it was a symbol of getting his life back on track. Mr. Basso’s life took an unexpected turn in 2014, when he found a lump on his neck while shaving. “I showed it to my wife and she thought we should get it checked out,” he recalled. A needle biopsy revealed it was squamous cell carcinoma, and it had traveled to his lymph nodes and an area just under his jawbone. “That was a devastating day, the day we found out it was cancer,” he said. “But then we thought, OK, we’ve got cancer, now what are we going to do?”

Mr. Basso first underwent traditional surgery to remove the tumor in his neck at South Miami Hospital. He also had robotic surgery to remove 20 lymph nodes, his tonsils and a small part of the back of his tongue. His follow-up treatment included radiation and chemotherapy. Mr. Basso’s wife, Carmen, is so grateful for Baptist Health’s family-centered approach to healthcare. “They understood this diagnosis was truly a family affair,” Ms. Basso said. “The treatment was not just about the patient, but about the whole family. There was never a meeting that I wasn’t part of. They made me feel like we were a team, and I was the team leader.”

Mr. Basso, 58, a building contractor and an avid cyclist who would ride 150 miles weekly prior to his diagnosis, never lost sight of his passion. “I kept saying during my treatment that I just wanted my life back so I could ride my bike and get back to work,” he said. Recent tests showed Mr. Basso remains cancer-free, and he is now back to riding long distances. “It’s part of feeling back in shape and feeling physically well, he said. “It’s like therapy for me.”

As a mission-driven, not-for-profit organization, philanthropy makes the difference between what we can do and what we must do to impact the lives of patients.